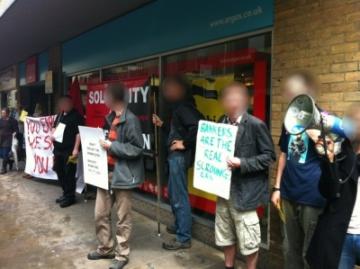 We began by leafleting outside the Tesco in central Oxford, a place good for visibility and with lots of people passing by. We had a good response from the public, many of whom were shocked at learning about this exploitation of unpaid workers. At this point we had a special guest visitor to the picket – the manager from one of Oxford's Holland and Barrett stores! This was the same manager who had taken such fierce exception to TVSF's last visit. She took the opportunity to loudly berate us for our protest as she was passing by. We chose to take it as a good-natured admission of defeat!

Having had only one negative response outside Tesco, and that being from a known workfare exploiter,we decided to move on. We wove our way through town to the Argos by Bonn Square where we held a second picket. We handed out leaflets explaining about workfare and got people to sign letters of protest. Here we had an even better response, with people eagerly taking leaflets, signing letters and talking to us to find out exactly what was going on with workfare. All were appalled by the epidemic of unpaid work and shocked by the sheer numbers of companies involved. In fact the one lone voice sticking up for workfare was from a woman who turned out to be an employer herself. Which just goes to show who really benefits from the scheme!

We had such a good response outside Argos that we soon ran out of leaflets. We stayed a while longer before calling it a day. This was the biggest anti-workfare picket in Oxford to date. It was a clear sign that, despite a fantastic victory against Holland & Barrett, the war against workfare goes on and is growing stronger all the time.

This article was published on 8 July 2012 by the SolFed group in Thames Valley. Other recent articles: