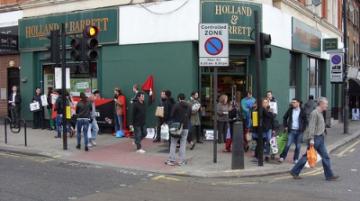 Last Saturday, the North London Solidarity Federation was joined by members of the Industrial Workers of the World and Boycott Workfare for a mid-day picket of the Holland and Barrett in Kilburn, North West London.

Picketers numbered over twenty in total and came prepared with flags, hi-vis jackets, and various banners decrying the exploitative nature of the government's various workfare schemes. Nearly 1000 leaflets were handed out over the course of the action and throughout the picket prospective customers were persuaded to do their shopping elsewhere.

Public response was overwhelmingly positive. One member of the public even stopped by for half and hour to help us do some leafleting. Others took the opportunity to go into the store and express their dissatisfaction directly to the Holland and Barrett manager on duty at the time.

With SF calling pickets at over twenty Holland and Barrett shops all around the country, our message to Holland and Barrett is simple: this is just the start. Pull out of the workfare scheme or expect further disruption. As Boycott Workfare says, “If you exploit us, we will shut you down".

This article was published on 3 April 2012 by the SolFed group in North London. Other recent articles: