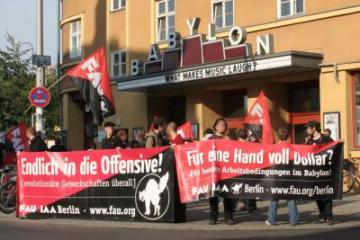 Coming not long after an SF member made a visit to the Berlin section of the FAU (Freie Arbeiterinnen- und Arbeiter-Union – Free Workers' Union) in July, the Thames Valley Solidarity Federation hosted a member of FAU Freiburg for a talk and presentation on the struggle to organise workers at the Cinema Babylon in Oxford. This was a struggle that was to prove an important turning point for the FAU, and one which briefly saw them banned from being able to call themselves a union. Having been a member of FAU Berlin at the time, our German comrade was very closely involved in the struggle and wanted to share with us the difficulties, the victories and the lessons that had been learnt.

In the talk, our comrade gave some outline of the nature of organised labour in Germany. Unions in Germany are predominantly under the control of the DGB (Deutscher Gewerkschaftsbund - German Confederation of Trade Unions), an umbrella organisation which represents over 6 million workers. While the post-war German state officially stays out of labour issues, apart from a supposed constitutional guarantee of the right to unionise freely, the reality is a minefield of court cases and historic legal precedents that form the difficult background of worker struggle in Germany.

It was against this background that the FAU began organising workers in the Cinema Babylon, a famous 'highbrow' cinema in what was formerly East Berlin. The cinema itself has a long history (including being a hiding place of anti-fascist resistance fighters and later being a favourite cinema of the East German communists) and has long-standing connections with Die Linke, who also provide the cinema funding through subsidies from the City Council. These personal connections also left it under the control of an owner who saw it as something of a personal fiefdom – and as always with these kind of bosses, led to many instances of bullying, low wages and poor working conditions.

When the FAU first began organising with the workers in the Cinema they found an owner who wouldn't make the slightest compromise on any grievances, so they began a campaign of direct action. When the boss refused to back down over issues of pay and conditions, the FAU began a campaign of pickets against the cinema, including during the high-profile Berlinale event, an annual film festival heavily patronised by the German left, and especially Die Linke. When the FAU began pointing out to people that the supposedly left-wing Die Linke was giving subsidies to a cinema that wouldn't even pay it's workers a decent wage, it caused much embarrassment among the party and increased pressure on the cinema boss to end the situation.

What followed was a series of legal challenges which saw the boss attempt firstly to get a formal labour agreement with a mainstream trade union over the head of the FAU and then to get an injunction to ban the FAU from making pickets. Eventually the boss received a successful ruling in which the FAU were banned from calling themselves a union and undertaking union activities. The legal reasons for the decision were spurious and were believed to be politically motivated against the FAU. Our comrade believes the real strategy was to mount legal challenge after legal challenge, stack cost on top of cost, until the FAU gave up and went away. All the FAU's opponents were to be surprised as the union matched them Euro for Euro and eventually received a judgement which overturned the previous ruling. The decision said the FAU were permitted to call themselves a union under the protection of free speech, that the previous judgement was inherently flawed and that they were thus free to carry on with their union activities.

Since then, the FAU has continued organising in the Cinema Babylon and elsewhere. Our German comrade told us that the main thing they took from the struggle was the need to get more organised and the importance of self-education. The FAU now runs regular drop-in employment law sessions, to help inform other workers as well as to ensure they have the knowledge required to negotiate the maze that is German labour law as a modern Anarcho-Syndicalist union.

Thames Valley Solidarity Federation took many important things from the talk. It seems that in many ways the FAU is walking a few steps ahead of us, and is working at a level that the Solidarity Federation is hopefully building towards. The FAU are building a level of organisation and infrastructure that is making them more able to help support fellow workers in struggle and hopefully more successful in spreading their ideas and methods among our class. Our comrade was also very interested in the growth and activity of the Solidarity Federation. He was especially interested in our focus on attempting to organise in our own workplaces, something he thought the FAU should perhaps begin to look into itself.

Everyone who attended thought that the talk was very interesting, as well as being incredibly relevant to what SF is doing now and what it is looking to achieve in the future. It is interesting that, while our two organisations have developed separately from one another, we have found them both to be travelling in the same direction. Thames Valley SolFed hopes that we will continue to build the links between our two unions, and that through co-operation and the sharing of experience we can help each other grow into the unions we're seeking to become.

This article was published on 26 September 2012 by the SolFed group in Thames Valley. Other recent articles: