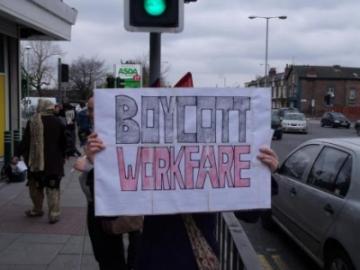 After complaints from the store manager, the Police threatened us with arrest if we didn’t move to the other side of the store onto the public highway, as we were trespassing on ASDA property. We then spent a couple of hours distributing our literature and talking with passers-by, who in the main were very receptive and in general agreement with our campaign.

We returned to the city centre and targeted two branches of Holland and Barrett. We were able to convince a number of people not to shop in the store and drive the point home that companies using unpaid labour to undermine jobs and conditions would not be tolerated.

Today's action was a success. But, ultimately, it was just the beginning. Despite a number of high profile drop outs, workfare remains a serious factor in the ongoing attacks on the working class and this day of action has to mark the start of a sustained campaign. We will be back - in the City Centre, in Wavertree, and in other areas. Not just picketing, but organising - so that until workfare goes away, the opposition to it doesn't either.

This article was published on 31 March 2012 by the SolFed group in Liverpool. Other recent articles: