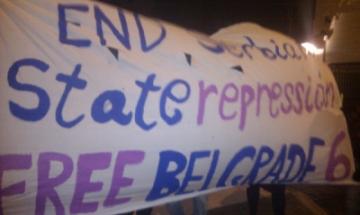 As most people will be aware, February is Serbia month in Great Britain. The British-Serbian chamber of commerce contributed by hosting an evening reception with guest speaker Dejan Popovic, the Serbian ambassador. With Serbian Anarcho-Syndicalists, the Belgrade 6, back on trial for “international terrorism”, South London and Brighton Solfed members felt it appropriate to attend.

Eight of us arrived at the upmarket apartment building in Pimlico and were kindly greeted and directed to the 18th floor for the reception. Upon arrival we were offered name-tags but declined and proceeded to greet Sir Paul Judge, the new chairman of the British-Serbian chamber of commerce. We asked him if he knew our friends Tadej Kurepa, Ratibor Trivunac, Ivan Savic, Ivan Vulovic, Nikola Mitrovic and Sanja Dojkic, but he had not been introduced.  Having run out of conversation we moved on, deeper into the reception.

Solfed members, not being accustomed to the conventions of black tie events, behaved inappropriately; tooting horns, banging things and chanting. The other guests were shocked at the lack of manners and confused by a banner and leaflets demanding freedom for the Belgrade 6 and an end to state repression. A scuffle broke out with security and SF members were eventually ejected. Upon leaving we heartily promised Sir Paul Judge that we would attend all his parties in future. A good time was had by all.

This article was published on 23 February 2012 by the SolFed group in South London. Other recent articles: