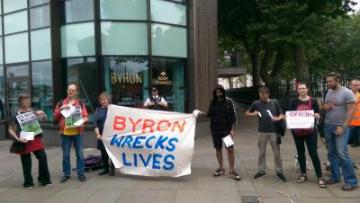 Byron Burgers acted despicably when they collaborated with the Home Office to deport their workers during a fake training event on July 4th. After the story broke from Spanish language newspaper El Iberico a number of groups and unions with Byron worker members have organised and called for action against Byron (see list below)

In a joint leaflet we demand:
no more threats to staff by immigration enforcement!
no discrimination against migrant staff members.
no to exploitative pay and conditions.

The big picket is on Monday 1st August at the Holborn Branch. In the meantime London IWW and South London Solfed have organised pickets at other branches to broaden the pressure on Byron. On Saturday we picketed the Greenwich Branch, turning away several groups of diners after talking to them and discouraged more by our presence. The restaurant remained mostly empty whilst we picketed. We spoke to one of the workers before starting whose main concern was that we keep the protest outside, perhaps worried about what kind of insects we might have up our sleeves.

Byron and other employers need to get the message that they can’t get away with setting their employees up for deportation. They can have their businesses shut for 48 hours and fined large amounts by the Home Office so we need to hit their income more than this, there’s only one language they understand. This means keeping the pressure up in a number of locations and using diverse tactics. See you on Monday.

The protest on Monday is co-hosted with the Unite Hotel and Restaurant Workers Branches, the United Voices of the World Union, London Latinxs, Black Dissidents, London IWW, Lesbians and Gays Support the Migrants, South London Solfed, War On Want and Global Justice Now.

This article was published on 31 July 2016 by the SolFed group in South London. Other recent articles: