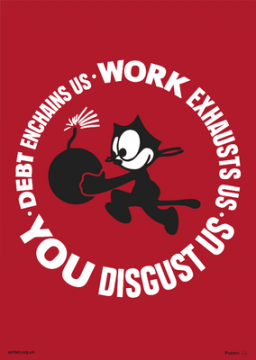 The Solidarity Federation were delighted to talk to members of Disabled People Against the Cuts, Feminist Fightback, Housing Action Southwark and Lambeth, London Campaign against Police and State Violence and Sisters Uncut in a discussion of direct action and strategy at our recent conference in London.
The groups came together to discuss their aims, tactics, difficulties and hopes for future activities. Members of the Brighton local spoke on behalf of Solfed regarding their experience organising around the hospitality sector.
Whilst sharing a focus on direct action to achieve our goals, the different groups held a variety of strategies. Some were more focused on changing policy, for example with DPAC’s campaign against the scrapping of the independent living fund or Sisters Uncut’s protests around housing and domestic abuse. Others had experience of more localised, community based work such as LCAPSV’s ‘buddying’ system for people looking to make complaints against the police, HASL’s support of people with housing difficulties and Feminist Fightback’s countering pro-life demonstrators who target abortion clinics in East London. Despite these differences however there was also overlap, for example Sisters Uncut is looking to become more of a community based campaign whilst HASL spoke of the need to challenge the local council’s housing policies.
Discussions were held around attitudes towards the media. Some groups had experience of gaining exposure for their campaigns, for example Sisters Uncut’s public ‘days of action’ or DPAC’s occupation of the Houses of Parliament, whilst others had a more wary approach, fearing potential ‘smearing’ by the national media. There was however general agreement that the media could be a useful and manipulable tool, albeit one that needed to be used with caution (for example by not providing individual’s details).
Another issue that arose was the service model of action, overreliance on few committed individuals and the problems of burnout. Here HASL’s discussion of their ‘Direct Action Casework’ approach was instructive: people with housing problems are encouraged to come along to the meetings and work out strategies there rather than having one other person ‘sort it out’ for them. This approach encourages skill sharing and collective involvement in the cases. Brighton Solfed also spoke of their attempts to make clear from the outset that they were a union that would assist people in struggle but wouldn’t do the work for them, although in practice their were difficulties in people not understanding what this meant.
Finally a common concern of all the groups was how to go beyond being an activist group to one more embedded in the community. Sisters Uncut spoke of their recent experience in linking up with local struggles around London, for example a successful demonstration in Hackney to reopen a children’s playground, whilst Feminist Fightback spoke of their experience working with North East London Migrant Action. Further to this their was discussion of how to make organising accessible in order to allow more people to get involved, from activities that help children get involved (and also allow parents to attend) to HASL’s monthly lunch clubs.
We would like to thank everyone who took part in the discussion.

This article was published on 8 December 2016 by the SolFed group in South London. Other recent articles: