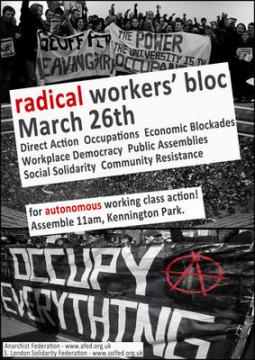 On Saturday 26th March the Trades Union Congress has called for a march against the cuts, and there is going to be a South London feeder march starting at Kennington Park which we will be joining. We are calling on anarchists, libertarian communists and militant workers from across the country who agree with the principles of solidarity, direct action, and self-organisation to join us on the demonstration to provide a visible presence and a revolutionary alternative to the reformism of the TUC.


With sufficient rank-and-file anger, the trade unions may be pushed into calling a general strike – only the second in British history. However, it’s us, not the union bosses who can stop the cuts. All reformist unions can offer us is sellouts like Aaron Porter from the NUS. We can’t put our faith in anything other than our own solidarity and ability to organise. We must take a lead in organising action ourselves rather than waiting on the TUC or anyone else to do it for us.

We also intend to argue that it is capitalism that has caused the crisis that has led to these cuts and that in response to their class war we need to reciprocate: meeting cuts with direct action - strikes, occupations and civil disobedience - whilst fighting for a different world which puts human needs first.

Bring red and black flags, banners and propaganda. The workers movement needs anarchist ideas and methods more than ever if we're to beat the cuts!

Please note: The Kennington feeder march on which the Bloc will form has been organised by local community groups in South London and has been agreed with the police. This guarantees nothing as the police regularly go back on their word, but this call-out is intended to be family-friendly as many of our members will be bringing their kids. We therefore do not anticipate the feeder march or bloc being 'kettled', although police tactics are difficult to anticipate.

This article was published on 21 March 2011 by the SolFed group in Brighton. Other recent articles: