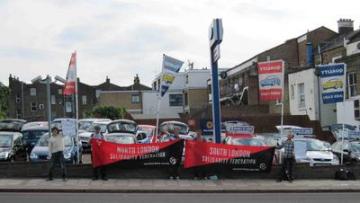 The past week has seen the London Locals of the Solidarity Federation participate in and organise a variety of practical class struggle activities.

Things kicked off last Saturday when SF members attended the "March for Unity" in Dalston. Organised to protest against the social causes of the recent wave of riots, hundreds of community activists, trade unionists, parents, students, workers, and pensioners walked from Hackney to Tottenham. Anarchists marched alongside NLSF's banners as well as the London-wide ALARM banner and a number of red and black flags.

Monday saw approximately 40 people attend the SLSF-organised talk with a member of the Seattle Solidarity Network at the Marchmont Centre near Russell Square. Focusing on the practicalities of SeaSol's many fights against wage and deposit theft, the talk was peppered with humourous stories of class struggle victories.

On Thursday, SolFed members attended a demonstration outside the home of the head of Wandsworth Council to protest the council's plans to evict a family whose son was accused of rioting. Much like the march on Saturday, the focus was on the social causes of the riot: poverty, inequality, and a lack of jobs, services, and social housing. SF's presence provided a slight counterpoint to the line being promoted by the large SWP contingent, namely that “Tory cuts” were to blame for the riots. In any case, what started out as a peaceful demo soon turned ugly when rows of riot police vans showed and cops began aggressively confronting peaceful protesters—not the least of which included a cyclist pensioner getting forcibly pushed off the street and onto the pavement. As if a reminder was needed, we know which side the cops are on in the class struggle...

The following day, Friday, witnessed a successful SF-organised picket in support of Spanish auto workers who are fighting the closure of their factory. Full details can be found here.

On Saturday, it was North London's turn to organise a talk, this time a public meeting on the recent struggles in Canada Post. With approximately 25 attendees (including a number of London posties), the speaker was an anarchist, IWW member, and militant in the Canadian Postal Service. Stressing self-organisation and the roll of the IWW's “Workplace Organizer Training 101” (which has been adapted into the SolFed "intro to workplace organising"), the talk finished with an in-depth discussion and many pints of beer.

This article was published on 24 August 2011 by the SolFed group in North London. Other recent articles: