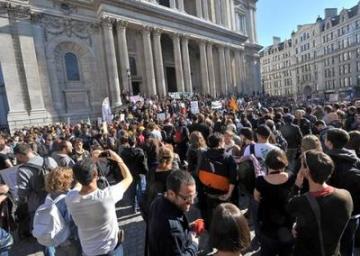 As we speak, hundreds of thousands of people are gathering in city centres across the world in order to stand against the status quo. We’re all here to voice our discontent with the way that our society and economy are organised, and the suffering and damage this causes to our lives, but what do we want to put in its place? And how will we get there?

The world is in crisis. All around us the global economy is failing to answer the needs of ordinary people. In the UK, the government has introduced round after round of spending cuts, attacks that are directed at the vast majority of the population. Savage attacks on the unemployed, sick and disabled sit alongside mass public sector redundancies, and attacks on parents accompany increasing prices through the VAT increase. That we are right to reject this world is not in question.
However, if we want to win, we need to recognise that being right isn’t enough. Unfortunately, our society is not a debating chamber where everyone is given an equal voice, and the decisions that affect our lives are not taken on moral grounds. Our rulers don’t care about doing right by us. What they care about is power and wealth, and supporting the interests they represent.
If we want to change the world, we will have to empower ourselves through direct action in every aspect of our daily lives. The biggest imaginable square occupation or march won’t change the world unless it’s accompanied by mass direct action. We can go on strike, collectively refuse to pay our rent, or even block transport hubs - anything that disrupts the economy will challenge the authority of bosses, landlords and politicians and help us reoccupy our own lives. But let’s be clear: these must be the actions of masses of people, since an activist minority will quickly be arrested and silenced.
Solidarity Federation is a non-hierarchical organisation that seeks to build a future without capitalism and exploitation. We believe that supporting each other in our day to day struggles is one way we can take back control of our own lives, and in doing so, lay the foundations of a better world.

This article was published on 16 October 2011 by the SolFed group in South London. Other recent articles: