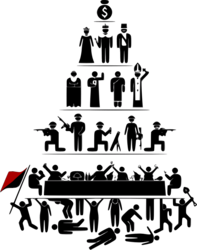 With all the media-driven excitement about the upcoming royal wedding, there's been a lot of speculation about 'what the anarchists will be doing' that weekend. To their credit, we've even been contacted by numerous journalists seeking information on what the Solidarity Federation, as one of the largest anarchist groups in the UK, is planning. The answer to that question is that we're not planning anything. Our feelings on the matter are those of indifference. Of course, in a rational society there'd be no hereditary privilege and, in fact, there would be no inequality at all. However, at this moment in history, it's capitalism, not feudalism, that is ruining the lives of working people.

With that in mind, North London SolFed will be doing what we always do: organizing democratically and non-hierarchically with our workmates, fellow tenants, and community members. As for the long-weekend, that's probably the only good thing the royals have ever given us. We'll be enjoying the day off work with family, friends, and co-workers. Some members may take part in demonstrations as individuals, but organisationally, we will continue to focus our energy and resources to support workers in struggle, get active in our own workplaces, and build a sense of community that transcends commodity relations and nation-states.

A far better expression of SolFed's politics is the historical struggles that have led to the establishment of the workers' holiday, May Day. It celebrates achieving the 8-hour day and it is a time to reflect on our victories and commemorate comrades lost in the struggle—not the least of which include the Haymarket Martyrs, a group of Chicago radicals and anarchists framed and executed by the state for participating in the struggle for a shorter working day. It is mass, international struggles like that which will bring down all rulers—aristocratic and capitalistic alike—and pave the way for a new world.

This article was published on 23 April 2011 by the SolFed group in North London. Other recent articles: