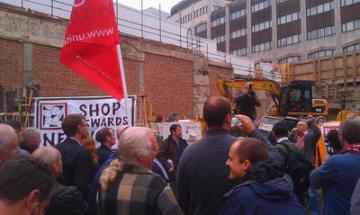 Today at 7.30 am electricians briefly occupied a building site in protest at attempts to cut their pay and conditions.

The conflict is because the “Big 8” of construction employers want to withdraw from the JIB (Joint Industry Board) agreement on pay, grading and seniority. They want to bring in new grades of semi­skilled electricians earning £10.50 and £14 an hour instead of the current hourly JIB rate of £16.25.  The protests against this change have been going on for several weeks now all across the country. Last week at the Olympic site workers blocked the site entrance for some time but, as the site is so huge, the management just moved people coming in to work to a different gate, so the protesters blocked the main road near the site for twenty minutes. The demo today was bigger, maybe 250- 300 people, and started out next to Farringdon Station.

After a few speeches, one of the organisers said that Unite had called for civil disobedience at the TUC conference, and it was illegal to hold a march without permission, but would we like to do some civil disobedience? People shouted “yes!” and we marched through Smithfield meat market with a sound system playing ‘Louie Louie’, watched by the meat packers and porters. We gathered again at the front entrance of the building site, from one of the “big 8” firms who want to opt out of the JIB agreements. We listened to Desmond Dekker’s ‘The Israelites’ and a few more speakers, including from the RMT and from Royal Mail, and then someone announced that we were going to occupy the site, and straight away we started going in. The security rushed to close the gates and we had to run through, then some very big security guards started grabbing people and we had to tussle to get past them and climb under some barriers, but we got onto the site quickly, shouting SMA- no way! (Which had me and the other non-electricians confused for a while- it’s the new semi skilled grade they want to introduce.)

Inside we stood surrounded by cranes and watching builders while the organisers made some more speeches and the police started to arrive in numbers. There was a huge cheer when we heard that simultaneously people were blocking the motorway tunnel in Newcastle.  After a very brief stay the organisers announced (to some boos) that we were going to leave with an ‘orderly retreat’ and we marched out to the tune of ‘A message to you Rudie’.

I felt the occupation was very brief but more than that I thought we were missing chances to communicate with other workers. When we marched through the meat market we didn’t have any leaflets to give the meat porters except “Socialist Worker” ones. When we were on site the only communication was via the megaphone, we weren’t going up to people and talking to them .Regarding the progress of the dispute so far Unite have said that they will ballot for strike action but haven’t said when. The changes come in to force in early December so people were saying they need a ballot quick. Balfour Beatty are already telling people to sign new contracts now or face the sack. There has already been one unofficial walkout outside London and people were calling for more. The next protest in London will be next Wednesday, 6.30 am, at Kings Cross station for the Crossrail project.

This article was published on 21 September 2011 by the SolFed group in North London. Other recent articles: