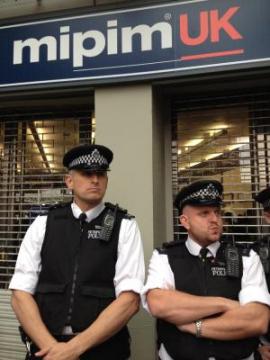 A few Solfed members went along to the StopMipim protest this Wednesday. Mipim is an event for local authorities to sell of public property, including social housing, to developers. Boris Johnson was kicking off the event with a speech, encouraging investors and developers to displace communities and gentrify our cities.

The Radical Housing network organised the protest (along with a counter conference) where 300 people went to shut the event down. Other groups including London Renters groups, Save Earls court, Focus E15 Mums and Save Charring Cross Hospital came in force. The protest was lively and everyone entering the property fair got a leaflet and an earful. Attendees were forced down a gauntlet of shame to a single door of the entrance in Kensington Olympia. Queuing ensued; attendants’ reaction varied from sympathetic, defensive and violent (one protestor was punched in the head, the attendee was arrested). Some attendants blamed the system; good point but they’re still getting filthy rich off it whilst we’re getting kicked and priced out.

Once the delegates got in we went around the corner to outside where Boris was giving a speech and made some noise. There was a house of cards made of letting agents’ signs and a house constructed of more signs surrounded by hay bales. We never really found out what the house was about, as people decided to move off back towards the entrance. There was a rush on the doors but the police formed a solid line pretty quickly. Protestors got punched and the batons came out but our line held steady and purposeful. The shutters came down to chants of “shut it down”. There was some reporting of the event getting shut down but from what we saw (up until we left at 12) the small side door that was being used earlier was still in operation. Still, it made for good symbolism (see picture).

There was a lot of anger and organisation on display and hopefully this will grow amongst private and social housing tenants. Check out the Radical Housing Network website for groups in your area (except People Before Profit ofcourse)

This article was published on 16 October 2014 by the SolFed group in South London. Other recent articles: