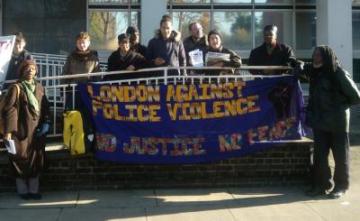 This summer, Jason, a young black man from South London, was assaulted by police officers in an unprompted attack. He had been using a public telephone when officers interrupted him and demanded he submit to a Stop and Search. When he refused, arguing the search was unjustified, officers pepper sprayed him, assaulted him and beat him to the ground. After this attack Jason was charged with obstructing a police officer.

In response, Jason and his family and friends called a number of protests outside Walworth Police Station, and Camberwell Magistrates Court, both in south London. Realising that the case of Jason was not an isolated incident, but part of the systemic criminalisation and harassment of black people by the police, these protests developed into the London Campaign Against Police and State Violence (LCAPSV).

LCAPSV has held pickets outside all of Jason’s court dates, and offered support to a growing number of people who have been victimised by the racist police and judicial system.

On Monday LCAPSV celebrated with Jason as the court ruled that the Stop and Search had been a misuse of powers, and that he was therefore not guilty of obstruction. The spurious case against him was dropped after just half a day in court. After hearing the testimonies of the two police officers who began the assault on Jason on 9 June, the judge concluded that the evidence given was “conflicting and lacking in coherence”, and that clearly there had been no reasonable grounds for the search in the first place. The case was heard at Camberwell Green Magistrate’s Court, where Jason’s supporters and members of LCAPSV maintained a presence both inside and outside the court throughout the proceedings.

The Stop and Search law used to detain Jason is part of the Police and Criminal Evidence Act (PACE 1984). The direct descendent of the racist Sus Law, Stop and Searches are seven times more likely to be carried out on black people than white, and in London fewer than 9% of Stop and Searches result in arrests. Sus powers contributed to the outbreak of the Brixton Riots, and it is argued that Stop and Search was similarly a major contributing factor to the English Riots of 2011.

Although the case against Jason has been dismissed, the officers who assaulted him are still yet to answer for their use of violence; Jason will therefore be pursuing a civil case against them. LCAPSV will continue to stand with Jason and any other victims of police and state violence.

This article was published on 8 November 2013 by the SolFed group in South London. Other recent articles: