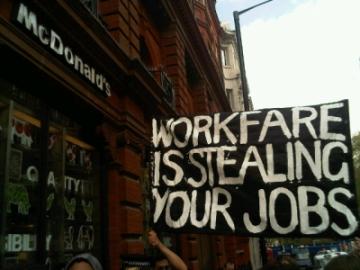 By midday we had joined others at Clerkenwell Green for the yearly Mayday march down to Trafalgar square. Numbers were lower than previous years, despite the apparent upsurge of workers’ disputes in the UK. For our part, London SF formed a bloc of 150 or so alongside members of the IWW, the Anarchist Federation, ALARM and other radicals. As the march rather tamely wound its way through London, largely quiet except for the anti-Workfare slogans emanating from the SF and friends (and the usual harassment of the police FIT – leading to a couple of arrests on the Strand), the sun finally came out.

Trafalgar Square was the usual medley of tubthumping speakers from the TUC, high on cliché and rhetoric, but low on concrete suggestion and material support, and rather eerily flanked by some decidedly oversized pictures of Stalin, Lenin and other dead, bearded men.  Occupy London activists had already failed in their attempt to set up camp in the square, so London SFers and friends moved onto their anti-Workfare demonstration.

We arrived at Bond Street at around 4pm under the watchful eyes of the TSG. The police were present in high numbers on the day and at the time of writing, it seems that there have been at least three arrests because of the demo. After briefly blocking the entrance to the huge West One Shopping Centre, a noisy and combative picket of 400 odd people quickly set off down Oxford Street, slaloming around police and traffic alike to stop, picket and even occupy companies participating in the Workfare scheme.  Various branches of McDonalds, Greggs, Holland and Barrett and Pizza Hut – amongst others - were forced to lock their doors and race to their shutters to chants of “IF YOU EXPLOIT US, WE’LL SHUT YOU DOWN!” and “YOU SAY WORKFARE, WE SAY WARFARE!”

Comrades from Occupy London also targeted BHS and Topshop, with the latter seeing a spontaneous demonstration merge with our picket to close off Oxford Street and march towards the junction with Tottenham Court Road, and then down Charing Cross Road, up the Strand and even through Covent Garden.  By 6.30pm, various shops were being targeted by smaller groups while the Met – unable to control the mobile, fast-paced picketers – were out of breath and cursing their luck.

As well as its speed, the picket was notable for the diverse mix of people on it, including a lot of people from Occupy London and Anonymous, as well as comrades from other anarchist and pro-worker organisations. We saw some colourful banners (“WORKFARE IS STEALING YOUR JOBS” being one highlight) and some inventive chants, all accompanied by music as we marched through the streets of London’s shopping Mecca. This - combined with the bright sunshine – contributed to the high spirits among the demonstrators, emboldened by their own ability to successfully shut down over 20 stores associated with the discredited Workfare scheme.  Some shops closed merely due to hearing us coming up the road.

All in all, the day was a huge success.  We proved that lively shop pickets are an effective means of disrupting the business of those involved in Workfare, as we had already seen with the original spate of demonstrations back in March, which led to large number of companies backing out. On top of that, it’s important to remember – as we said at the top - that the Haymarket martyrs were fighting for an 8 hour day, something which is still mere fantasy in most retail outlets and their vast supply chains, well over a century later. High street retailers often make us work long shifts and long weeks for chronically low wages. Workfare is nothing but salt in the wounds, forcing people to do that for a mere £65 a week (even less if you’re under 21!).  For those already in work, it drives down their wages and their organising power at work even further.

The campaign against Workfare continues.

Click here for a video of London Mayday, including the SF anti-Workfare picket

This article was published on 3 May 2012 by the SolFed group in South London. Other recent articles: