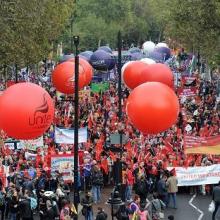 On the day some of us met up at Charing Cross station, in every corner you could see union branches and anti-cuts groups from up and down the country meeting up in the concourse.

We arrived at the Embankment to a sea of banner and as wemarched we met both people we knew from round London and people from all across the UK. We met Welsh comrades who'd come over night or on the 5am coach which made us feel pretty lazy. 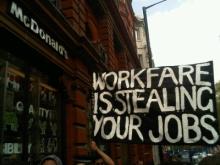 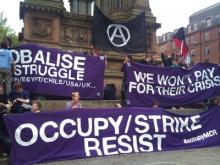 On Sunday 2nd October, members of Solidarity Federation were amongst those who descended on Manchester to demonstrate at the start of the Tory Party Conference. 30,000 people took part in the march, and there was an occupation of Albert Square which at the time of writing is still ongoing. 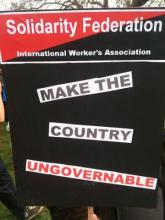 I work as a support worker for a private company that provides social care for people in Sheffield for people with learning disabilities and mental health issues. The company I work operates across the city. According to government officials, cuts to public spending will not harm front line services, workers, or service users. The reality of the situation is that working conditions are getting worse, day services are closing down, and those paying for the support services are being excluded from any of the decisions relating to care they supposedly direct and influence.