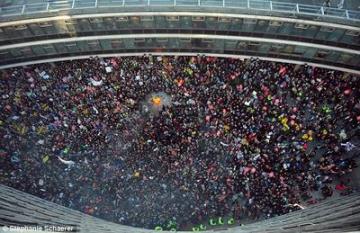 Solidarity Federation, which helped organise the Radical Workers' and Students Bloc at the NUS/UCU education march derides "absurd and patronising" attempts to blame it for damage at Tory HQ - and calls for increasing direct action against cuts.

News reporters have been indulging in some imaginative speculation over the last few days suggesting that the temporary occupation of the Conservative Party headquarters on November 10 was down to an internet conspiracy consisting of, among other groups, the Solidarity Federation. This is sensationalist nonsense.

Of course some of our members – those studying or working in higher education – were at the demonstration, but we cannot take credit for the storming of 30 Millbank when even a brief look at the video and photo evidence available shows that a wide cross-section of the national student community took part.

It is absurd and grossly patronising to attempt to pin the day’s hugely unpredictable events on the heads of an apparent “hardcore of troublemakers” or “protest junkies,” in articles that sit alongside footage of student participants confirming that this was their first ever demonstration. Even if we were inclined to manipulate and control crowds, the chances of us successfully doing so as a small minority in the midst of irate thousands are surely minimal.  What must really terrify the politicians is to see how red and black flags and masks were hugely outnumbered by the hyped-up faces of students rejecting cuts to their education - cuts which now bear the fingerprints of all three major political parties.

Against this backdrop then, the treachery of NUS President Aaron Porter, who called the occupation “despicable” and accused genuinely angry students of “hijacking” his march, looks worse and worse.  We can only assume that Porter is concerned about the effect that this will have on his credentials as a future Labour Party high-flyer, following in the footsteps of Jack Straw, Phil Woolas, and the like in using the NUS as a stepping stone into professional politics.  A photograph of Porter with the word “DESPICABLE” has now gone viral online, surely only the first step in the gradual abandonment of the NUS as the self-appointed campus spokepeople.

Following the demonstration we have already seen occupations at the London School of Economics and Manchester University - which would tally with a variety of other tactics that we would advocate as next steps in the fight for education. We also call on students to join the next big walkout on November 24, co-ordinating with the UCU union and other university staff while also reaching out to school sixth formers who are looking at paying £50,000-60,000 for an undergraduate degree.

We hope students will be the first of many to directly reject the cuts which affect us all and we will continue to organise against this scorched-earth austerity plan in our workplaces and neighbourhoods, democratically and independently of union leaders and politicians bleating the mantra "business as usual." Only through struggle - direct action and solidarity between workers, students, the unemployed and the retired - can we fight back in this class war of the rich against the rest.

Permalink Submitted by Anonymous on Thu, 05/01/2012 - 12:10
fuck the right wing press solidarity to the milbank protesters

This article was published on 13 November 2010 by the SolFed group in South London. Other recent articles: