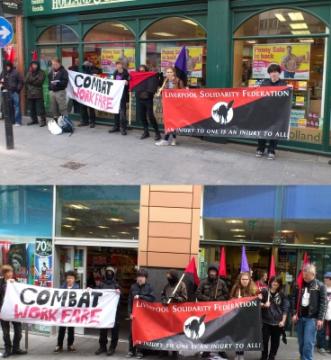 We weren't as succesful as hoped when asking people not to use the store, though most did stop and take a leaflet before crossing the picket. However, a fair few people did turn away, whilst one older woman went in after talking to us specifically to give the manager a piece of her mind!

After about an hour and a half, we packed up and moved on to WH Smith. At this point, we had picked up a number of extra people as a result of activists turning up late and a couple of members of the public deciding to join in. This meant that things were a lot more lively by the time we reached Smiths, allowing for a simultaneous picket and occupation.

Here, many more people turned away when asked, whilst others made a point of saying that they were only going in to use the Post Office upstairs. A number of youths decided to hang around and find out what was going on, engaging particularly with the younger UK Uncut activists. Again, most of the public was receptive to our message and received leaflets gratefully. We stayed at this picket for about an hour before deciding to move on to the final target.

At the last Holland and Barrett, we set up as before and began handing leaflets out to the public. However, after a short while the manager of the store came out to tell us that they didn't participate in the scheme. During a conversation, it turned out that whilst the chain as a whole still did, he had refused to accept any more placements in his store. The one placement who had been there now had a permanent job, whilst the regional manager had been told unequivocally that if she wanted workfare there she would need to get another manager.

Following this he allowed us to leave some leaflets in his store and was seen handing them to customers asking what the commotion outside was about. We had conversations with a number of them who shared our (and the manager's) opposition to the scheme, whilst handing out the last of our literature. Finally, we wrapped up the picket and drew the day to a close.

The day was a success, given how many people we turned away from the store, as well as how many people we spoke to about getting involved with the campaign. Successive actions in the city centre are part of the Liverpool local's strategy to fight workfare, alongside branching out action into local areas outside the centre. However, it also underlined that these kind of actions have a lot more dynamism with larger numbers and that we can't be complacent about getting them every time.

No doubt there will be other lessons to learn along the way. But either way, we will continue to pile on the pressure against workfare providers. The same threat as before remains: if you exploit us, we will shut you down. As many times as it takes.

This article was published on 6 May 2012 by the SolFed group in Liverpool. Other recent articles: