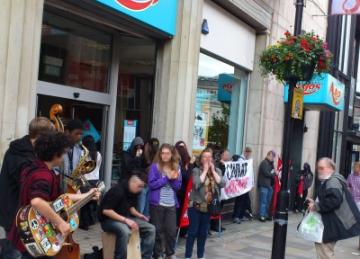 Over the next half an hour, security guards and other heavies arrived at the shop until a crowd of them were huddled just inside the entrance. A number of them were recogniseable from an incident last year when guards attacked a UK Uncut protest, and at least one of them was friends with prominent members of local far-right groups. They repeatedly left the shop in ones or twos to stand across the road and glare at us before returning inside. Once the picket was wrapping up and we were ready to move on, they all stepped outside to continue staring at us, presumably to make themselves feel hard in the absence of any excuse to actually pick a fight.

Their behaviour didn't intimidate us, however. We stayed for the same length of time as normal on these actions, moving on to Argos of our own accord.

At Argos we continued to hand out leaflets and talk to shoppers about Argos's involvement in workfare. Here, we were joined by local musicians who - as two weeks ago - added a lively soundtrack to the action. We stayed here for another hour and a half, until we had fully run out of leaflets, before finally packing up and calling it a day.

Alongside the pickets, we had called an all day communications blockade against the Liverpool Holland & Barrett store. This was picked up and supported by anti-workfare campaigners nationwide, so we're willing to bet that the disruption we caused on the doors was matched by that to their phonelines.

We will be returning to the city centre once more for the beginning of the national week of action against workfare on 7 July. In the meantime, there will be another communications blockade against profiteers A4e on Tuesday, and another day of action in Wavertree next Saturday. Make sure that you get involved because the more of us there are, the bigger impact we can make!

This article was published on 24 June 2012 by the SolFed group in Liverpool. Other recent articles: