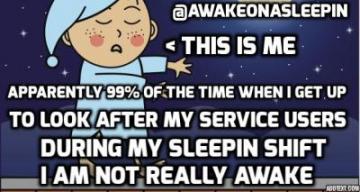 Care workers employed by care provider Alternative Futures Group (AFG) have recently voted on industrial action in a Unison organised ballot over the long-running, sleep-in dispute. Ballots have now been counted, and 87.4% voted to strike on a 51.5% turnout.

Unison has also recently sent out consultative ballots to members of another large care provider, Lifeways Group. The long running exploitation and financial abuse of workers in the care sector by their employers is finally starting to get attention, and care workers are saying “enough is enough”.

The sleep-in dispute has been going on for some years and revolves around sleep-in shifts, where a care worker will stay overnight at work in a person’s home or in a care home, in case they are needed in the night. Typically, they will sleep in an office or spare room, and be available to work whenever called on.

Care providers are denying that this time spent at work during a sleep-in constitutes work, whilst care workers have been making their case that as they are at work, cannot leave the premises and could be called on to work at any time, then it counts as work, and as such, they should be paid at least the National Minimum Wage (NMW) for the time spent there. Currently, most providers pay a flat rate payment, which can vary greatly between companies and areas, and can be as low as £26 for what can be a 9 or 10 hour sleep-in period.

Care workers have been challenging providers over their refusal to pay the NMW for sleep-in shifts in employment courts. Several wins were found in favour of workers, with providers paying up to 6 years’ worth of back pay to the claimants.

In April 2017, the case of Royal Mencap Society vs. Tomlinson-Blake was heard at the Employment Tribunal. The case was followed closely by providers and care workers; it would be a high profile and important ruling. The court found in favour of Tomlinson-Blake, which had a huge effect on the care sector.

As care providers were now considered liable to pay sleep-in back pay, many decided to start paying top-ups, which meant that workers were paid the equivalent to the NMW for all hours spent at work. No doubt many companies did this to make the case that they were now complying with the NMW law so as to avoid any back pay claims.

HMRC also launched the Social Care Compliance Scheme so that providers could self-assess what they owed to their staff, and local authorities now commissioned more funds for providers to take account of this ruling.

Mencap decided to appeal the ruling, even going to the trouble of hiring various celebrities to play on their charitable status and make the case that paying back pay of the NMW to low paid workers would be unaffordable for them, despite having millions in reserves and a high earning executive team, which includes CEO Jan Tregelles, on £167,000 a year.

In July 2018, the appeal was heard, and the court found in favour of Mencap. After the ruling, providers took it upon themselves to brutally cut their employees’ wages. Lifeways Group did so with no notice and with immediate effect in their November 2018 pay. Many Lifeways employees only found out on payday that for the shifts they had already worked, they would now not be paid the top-ups. Some Lifeways staff had their pay slashed by up to £90 a week just before Christmas. AFG staff had their pay cut similarly in January 2019.

Care providers now started returning their paperwork for the Social Care Compliance Scheme to HMRC, stating that they owed their staff nothing. Many companies decided to cut their employees pay without informing local authority commissioners of their actions, leaving even local councils astonished at their behaviour.

Some providers have now slightly increased their flat rate sleep-in payments in an effort to placate their staff, but failing to mention that they are still pocketing a large amount of the money that they promised councils would be paid to the workers. Mencap themselves, who decided to fight workers in court rather than tackle the government on the social care funding issue, have decided to now recognise that care workers should be paid the NMW for sleep-ins rather than a flat rate, and have continued to pay their staff the NMW, whilst workers across the country employed by other companies have their wages cut and livelihoods attacked due to their actions.

Lifeways meanwhile having got wind of the consultative ballots sent out by Unison, and despite having not bothered to consult their staff in the slightest when cutting their wages, have now decided to write to every employee and make their case as to why they can’t afford to pay the NMW. Of course, at the same time, they make sure to give their thoughts on why strike action is not the right thing to do, even arranging road-show style meetings that their staff are invited to attend.

Lifeways CEO Justin Tydeman has been repeating the same old excuse that councils are not paying enough, but neglecting to mention the fact that Lifeways are keeping a significant chunk of the money provided by councils for sleep-ins for themselves.
Private care providers have always run their business according to that golden rule of capital: charge the highest possible price for delivering the cheapest possible service,... and pocket the rest. The whole business model of private care providers is one that is built on exploitation and the driving down of wages and conditions.

Now, however, care workers are saying they have had enough. The sleep-in case is the tip of a very large iceberg where workers have been subjected to unacceptable working conditions and a toxic management culture for a long time.

Common issues across the sector include chronic understaffing, leaving some workers stuck at work with no one to relieve them for days on end; continuous underpayment in wages, including non-payment of expenses and overtime with pay slips that are difficult to understand; bullying tactics and hostile attitudes from managers, all the way to the highest level of the company; and poor working conditions, with some sleep-in staff spending their nights at work on old and worn-out couch beds. All this comes on top of the low pay care workers receive, with many on the minimum wage or only slightly above, yet having huge responsibilities in their role, and working long, exhausting shift patterns.

Care workers do not take the decision to strike lightly, as they care for the people that they support, but unless their employers listen, then they have shown they are prepared to take action to stop the continuous attack on working conditions and the mistreatment of hardworking staff, which inevitably leads to a lower standard of care being provided. High staff turnover, poor working conditions and uncaring management can only affect the people that are supported by these care companies. This is a massive factor in the care workers’ decision to say; “No more; this cannot continue!”.

Care company executives see only profit and are completely detached from the frontline of care work, most having never done it themselves. Many senior managers at large care providers rarely visit the services they manage, and do not know the frontline staff or the people that they support.

Private care providers have got away with shocking and unethical practices for many years, and the sleep-in case has now pushed it to the tipping point, where care workers have said; “Enough! We are prepared to take action and fight back!”.

This article was published on 12 February 2019 by the SolFed group in Manchester. Other recent articles: