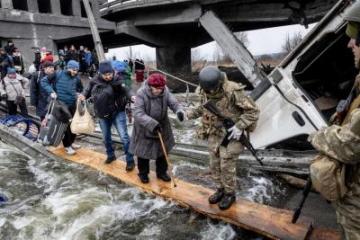 The need to help the people of Ukraine should not blind us to the fact that there is no such thing as a just war. There are only wars in which ruling elites use ordinary people like pawns to be sacrificed to meet their immediate interests.

“For four months in 2017, an American-led coalition in Syria dropped some ten thousand bombs on Raqqa, the densely populated capital of the Islamic State. Nearly eighty per cent of the city, which has a population of three hundred thousand, was destroyed. I visited shortly after ISIS relinquished control, and found the scale of the devastation difficult to comprehend: the skeletal silhouettes of collapsed apartment buildings, the charred schools, the gaping craters. Clothes lines were webbed between stray standing pillars, evidence that survivors were somehow living among the ruins. Nobody knows how many thousands of residents died. What is certain is that the decimation of Raqqa is unlike anything seen in an American conflict since the second world war.”

“The bombing of Dresden was a British-American aerial bombing attack on the city of Dresden, during World War II. In four raids between 13 and 15 February 1945, 772 heavy bombers of the British Air Force and 527 of the United States Army Air Forces dropped more than 3,900 tons of high-explosive bombs and incendiary devices on the city. The bombing and the resulting firestorm destroyed more than 2.5 square miles of the city centre and killed an estimated 22,700 civilians.”

This article was published on 8 March 2022 by the SolFed group in Manchester. Other recent articles: