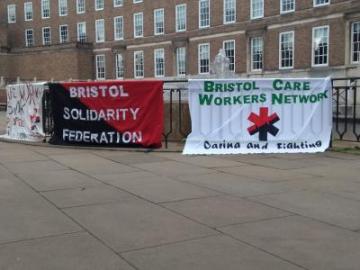 Bristol is great, right? This city was named the “best place to live” in the UK by the Sunday Times in 2017, the best place for under 26s by The Independent in 2019, and Bristol districts like Easton and Old Market regularly win national accolades as the best/trendiest/coolest place in the UK to set up home.

The city exudes a progressive, green and tolerant vibe; 62% of Bristolians voted remain in the Brexit referendum, and all four of Bristol's parliamentary constituencies are held by the labour party, as is the city’s elected mayoral office. Bristol boasts Fairtrade City status and was named Green Capital of Europe in 2015. Newcomers to Bristol tend to see the city as a liberal paradise.

It isn’t. The city’s woke self-image is a sad irony in what is one of the most unequal and starkly divided places in the UK. Some of the UK’s most deprived wards are in Bristol, and yet these “deprivation hotspots” exist a few streets away from some of Britain’s wealthiest neighbourhoods. A 2015 survey by Bristol City Council found that 16% of the city’s population (69,000 people including 10,500 older people and nearly 18,000 children) live in these hotspots.

These numbers are increasing, despite (or, more likely, because of) the savage gentrification of the inner city. The most deprived parts of the city are Lawrence Hill, Whitchurch, Hartcliffe and Filwood.

Lawrence Hill is a two minute walk from Old Market, which was ranked second in a list of the UK’s “coolest places to live” by the Conservative-supporting Sunday Times newspaper in 2018.

Neighbouring Easton, a literal stone’s throw from Lawrence Hill station, is perhaps the most fiercely contested district in the city’s social struggles. Stapleton Road in Easton was dubbed “Britain’s worst street” by race-baiting hack journalists at the Sunday People in 2011. Neighbouring St Mark’s Road was crowned the “Best Street in the UK and Ireland” in the 2020 Urbanism awards. The two streets not only share a postcode but actually have an intersection with each other. You can stand at the bottom of the steps outside Ladbrokes, with the Black Swan on your right and Jeevan’s Sweets to your left, with one foot on the country’s most desired street and one foot on its’ most reviled. This is a uniquely Bristolian experience.

The Easton area (winner of the dubious accolade of Time Out’s “coolest neighbourhood in Bristol” in 2019) has seen the UK’s biggest increase in property prices in the last 10 years, with average house prices up by 120% since 2010, according to The Guardian. This is gentrification, pure and simple, and it is this relentless inflation of the cost of living in Bristol that has created a city in which the nation’s poorest sleep on the doorsteps of the nation’s most privileged. The award-winning restaurants on St Mark’s Road and the tent sleepers in Eastville Park are symptoms of the same social sickness.

As well as its’ economic divide, Bristol is rigidly segregated by ethnicity and race. 22% of people in Bristol identify with an ethnicity other than White British, significantly higher than the national average of 14%. Yet although Bristol is famous for diversity, a 2017 report by the Runnymede trust ranked Bristol the 7th worst out of 348 regions in England and Wales for racial inequality, with a particularly stark disadvantage in employment and education. If you’re a white newcomer to Bristol, and you’ve found yourself wondering why your new social circle is so monochrome in such a multicultural city, there’s your answer. Bristol’s jobs and schools, the institutions of social mobility in capitalist society, are rigged against people of colour.

Visitors and new arrivals to the city often comment on the city’s lack of inclusion and atmosphere of segregation. In 2017, business owners in Broadmead shopping centre hosted a stunningly tone-deaf “Jamaica Day” as an advertising gimmick. The stunt was branded as “disgusting and disappointing” by the Jamaican High Commission’s representative in Bristol, due to it’s appropriation and “reductionist” stereotyping of Jamaican culture. The event was remarkable for the apparent lack of involvement from Bristol’s prominent Jamaican community. St Paul’s, the historic heart of Caribbean Bristol, sits just the other side of the motorway from Broadmead. This is another example of a divided city; a place where one community can lampoon and exoticise the other, apparently ignorant of the other’s existence less than a mile away. It’s hard to imagine this happening anywhere else but Bristol.

Arguably the biggest black mark against Bristol’s reputation for tolerance is the city’s police force. Police officers from Avon and Somerset Constabulary made national headlines in 2018 after they tasered their own race relations officer for “looking like a suspect”. In 2017 an independent report described Avon and Somerset Constabulary as “institutionally racist” after a frankly harrowing series of failures by ASC led to the murder of a disabled refugee by a white neighbour. In December 2020, six police officers were filmed restraining and using CS spray on a black mother on a Bristol bus, in front of her young child. The incident began as a dispute over the change for the woman’s fare.

These incidents are shocking, but it’s the statistics that paint the bleakest picture of life for people of colour in a city policed by racist thugs. 160 complaints of police racism were lodged against Avon and Somerset Constabulary between 2014 and 2019, with police upholding a mere 1% of these claims.  In 2016, The Bristol Cable reported that the racial bias in police stop and searches was actually increasing rather than decreasing, and a 2018 article by the Bristol Post, hardly a progressive source, reported that black people were 7 times more likely than white people to be stopped and searched by ASC officers; a figure comparable with those of the Metropolitan Police in London. Speaking to Freedom News, activists from Bristol Copwatch described Avon and Somerset Police as acting like slave patrols. Bristol’s racialised class war is being fought with tasers and pepper spray as well as with rent increases and housing sell-offs.

Part of Bristol’s utopian sense of itself comes from the apparent strength of the city’s green movement. In 2015, Bristol was given a European Green Capital award. On their website, the woke PR firm Greenhouse describe Bristol as having a “strong identity” of “sustainability”, praising the city’s “long term commitments to climate change and [becoming a] low carbon, happy city.” VisitBristol.com cites Bristol as the UK’s first “cycling city”, and Bristol was described as “the vegan capital of the world” by the website Vegan Food and Living in 2019.

Sadly, Green Bristol’s borders end at the limits of the city centre. In 2018, residents in Avonmouth, West Bristol became so frustrated by the stench, industrial dust and plagues of flies that infest the community that they threatened a tax strike. Avonmouth, a suburb and industrial area on the far western edge of Bristol, has been dubbed the “waste capital of the south west” by local journalists, due to the multiple waste processing plants in the district. 175,000 tonnes of waste are incinerated annually at the Avonmouth Suez plant alone.

The energy from Avonmouth’s rubbish burners has been described as “green” and “sustainable” by the council and the companies responsible, and makes up a significant part of the city council’s plans for a carbon neutral Bristol by 2030. The claim that burning rubbish is in any way “clean” energy has been hotly disputed by campaigners and branded an “absolute lie” by independent researchers. Avonmouth is only a fifteen minute drive from City Hall, but it feels like another world. This is yet another symptom of a divided city; a city offering vegan burgers to the few and burning garbage to the rest.

The city’s eco credentials are further marred by its dysfunctional public transport system. The shoddiness of Bristol’s privatised bus service is a frequent in-joke among locals. But, like everything, Bristol’s public transport problem is fundamentally a class issue. A 2020 study by the Design and Manufacturing Futures Lab cited “transport poverty” as a key factor in the social and economic deprivation that is felt so painfully in areas like Hartcliffe and Avonmouth. These are districts that lack local amenities and services, and where many residents are too poor to own a car, meaning that access to things like health centres and schools is restricted. The remote geography and the lack of public transport keeps these areas cut off and isolated from the affluent, leafy city centre, starving the residents of access to the culture and community that the city supposedly offers.

The takeaway here is that Bristol is indeed a great place to live, provided that you’re rich and white. The city’s reputation as a left-wing bubble is skin-deep; Bristol’s mayor and representatives have shown little interest in tackling the stark social issues described above, preferring to rest on their laurels than address the gaping inequalities that seethe beneath the surface of this hipster mini-London.

Bristol’s radical left also has some difficult questions to ask itself. Are we guilty of the same complacency? Are we just another part of the city's progressive veneer? Why are we more comfortable spray-painting around Stokes Croft than fighting food poverty in Filwood? In such a divided city, on which side of the line do we really stand?

We are not asking this to detract from the considerable achievements of our comrades in recent years, or to absolve ourselves from responsibility for the same failings, but to challenge all of us in Bristol to scratch the surface and see the real struggles underneath.

This city is not a paradise, it’s a battleground. Which side are we on?

This article was published on 29 March 2021 by the SolFed group in Bristol. Other recent articles: