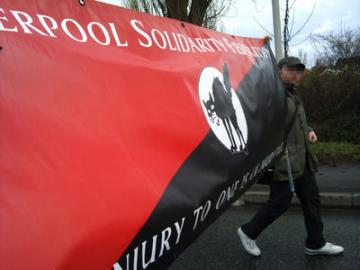 Today, members of the Liverpool Solidarity Federation travelled to Moreton, to show solidarity with workers at the Burton's biscuits factory fighting to save their jobs.

A march and rally, organised by the Unite union, saw several hundred people assemble at Moreton Shore car park. The march took in much of the surrounding area, with lots of support and banter from local people, an march past the factory before returning to the starting point for a rally. SolFed members carried our banner on the march in a visible show of solidarity, before handing out copies of our freesheet, Catalyst.

The company had previously reached an agreement with Unite to guarantee work until 2012 and to make Moreton its flagship site. It has since reneged on that deal and is looking to close the plant. The union remains in negotiations, and has said it will be looking at a legal challenge to the closure.

However, it is clear that this will not be enough. Though the mood of the event was upbeat, there was an obvious minority who seemed resigned to defeat, whilst still others suggested amongst themselves that the march should have stormed the factory and refused to leave. With the company not even acknowledging their agreements with Unite, it certainly looks as though direct action - such as an occupation of the factory - would carry far more weight.

Whatever happens, the workers whose jobs are under threat have our continued support and solidarity in their struggle. An injury to one is an injury to all!

This article was published on 26 February 2011 by the SolFed group in Liverpool. Other recent articles: