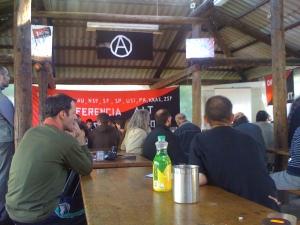 In the first part of the conference, reports were given from each country. The SolFed delegation commented that “we were particularly impressed by the Polish ZSP, who have grown to over 50 members within 3 years, and have been involved in a range of struggles. We think we could learn a lot from them with regards to developing union functions.”

The report by the Russian section KRAS brought home how bleak the situation is in much of the world, for example when they described the conditions of illegal migrants working in construction. Their lives are endangered by Nazis and police when leaving construction sites, and when organising at work they face the risk of deportation and mafia violence.

The second section was reports about specific conflicts which sections have been involved in. The CNT-F Pau local described their organising work using 'committees'. These were groups they set up outside the union in order to work with other militant workers who apparently had a deep distrust of the unions, which they initially at least extended to the CNT-F. The most inspiring action was an occupation of a state labour authority organised by the unemployed committee. This involved some mothers who were taking direct action for the first time, and who proved to be the most militant - remaining until they were removed by the police. Some of the most active members of the committees later joined the CNT-F as particular struggles subsided.

The ZSP also gave an account of their work with a Polish emigré worker, who after being placed by a temporary work agency in an unsafe shipyard job in Holland was left with a €2,000 hospital bill and out of pocket for his transport costs. He had not been provided with insurance or training, and did not even know the name of the shipyard where he had been working. Using some clever detective work involving a combination of internet research, an interview and Google Earth, the ZSP tracked down the shipyard, and organised actions in Poland and Holland together with a sympathetic Dutch group (Anarchist Group Amsterdam, AGA), which not only won him back the money but also improved conditions for future temps there.

The CNT-E report about the struggle at Ryanair highlighted the problems facing union activists. There, one CNT militant was sacked after refusing to sign a document dissociating himself from the union. While the CNT won reinstatement through the courts, this provoked a debate within the union about legalism, direct action and how to organise against powerful multinationals, which was also reflected in the subsequent discussion. Two FAU members from Kino Babylon in Berlin also gave an update on the situation there, since the court ban on the FAU’s union activities was reversed.

The final section of the conference was a discussion of self-management and co-operatives, introduced by a presentation from the Italian section, USI. They set out a description of their "mutualist" strategy, to build up workers co-ops as a concrete way of building links of solidarity and mutual aid, forming an alternative to capitalism which it could "progressively replace". This idea was criticised by a piece from CNT Grenada’s education union, which stressed that “Above all, we do not think that multiplying cooperatives could progressively change the capitalist system.” The discussion was complicated by trilingual translations, but there was widespread scepticism towards a strategy of self-management under capitalism as opposed to class struggle along anarcho-syndicalist lines.

La Humanidad from Peru gave a presentation about the current situation and history of the workers' movement in Peru, as well as about their newspaper. From their presentation and from reading their newspaper it was clear that they lean closer to mutualism than to libertarian communism; nonetheless they have a clear orientation to the workers' movement, taking an interest in current organising by workers such as in the textile industry. They are also aware of some of the shortcomings of mutualism, which has to be assessed in the context of the limited welfare state and extended informal economy in Peru (where self-employment is a reality for many, and co-ops form a practical means towards greater income security and public services as opposed to a revolutionary strategy).

The SolFed delegation concluded that “Overall, we feel we got a lot out of the conference, we learnt a lot, and we made some good links, especially with comrades from Eastern Europe. Many delegates welcomed the exchange of experience and ideas, saying that there is a need for more, and several concrete ideas with regards to sharing skills and best practice have come out of this.”

This article was published on 24 August 2010 by the SolFed group in Brighton. Other recent articles: