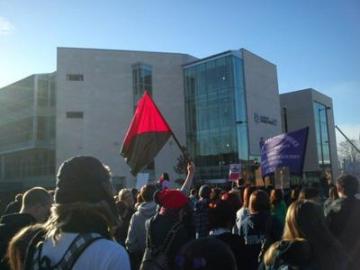 Initial reports and images from Liverpool London, Brighton and elsewhere on today's events, where Solidarity Federation has a presence for the student anti-fees protests:

Initial estimates suggested a turnout of thousands who brought Lime Street to a standstill, with a fast moving march featuring an attempted sit-down in Castle Street.

While most commenters are agreeing that the protest has been peaceful, police brought out dogs and horses and there have been complaints of "intimidating behaviour." The march was largely halted as of 1pm but quickly got moving again and reached the town hall at around 1.30pm. Hundreds of people filled all levels of the Liverpool One shopping centre, and the protest broke up at around 2.30pm.

The first reported property damage was to buses caught in the moving crowds, one quote had the drivers as "amused and supportive."

The main incident saw students occupy the Guild (Liverpool's Student Union) after the march had broken up, in an interesting twist on the story of over a dozen occupations at universities across the country - apparently many students have remained unimpressed with the performance of the likes of Aaron Porter "representing" them at the NUS.

Thousands more turned out for a march through the centre of the city which commentators initially described as "noisy but peaceful" - however as protesters swirled around Whitehall our members at the march were warning that the police seemed to be preparing a kettle, the tactic used by the Met to restrict and kill off protests by creating a cordon which gradually tightens around the crowd. Police successfully set the kettle up at around mid-day with only cursory attempts being made to break out of it.

Despite breathless reporting of a police van being rocked this was unrepresentative of the rest of the march, and our source said it was later left alone "for precisely that reason." Generally, although pictures have emerged of minor scuffles, there seems to have been very little fighting and as the march wound down there were reports of 15 arrests and eight injuries. Anarchists were still fingered for whatever violence did happen however (what busy bees we seem to be in the minds of the media).

With 800 officers drafted in for the day, police tactics seem to have returned to the G20 style which has become Met tradition in recent years.

The city saw an energetic march converging on Dyke Road Park, from age 12/13 up. Numbers were difficult to estimate, but final police figures for the day indicated around 3,000 turned out. One noted at 3.30pm: "Speeches were largely ignored, and over half the crowd has broken away on an unauthorised march. Cops are heavily outnumbered." As it ended many converged on the town hall, where police pushed the crowd back as it attempted to storm the building. Subsequently a Vodafone store was briefly occupied and a Poundland store was looted before around 400 students attempted to storm the central police station before being repelled by lines of riot police. An occupation of Brighton University survived attempts by riot police to evict it, and remains overnight.

Most spectacular however were the events after the official march ended, with reports coming in of students smashing in their union building and large numbers of police being mobilised. It appears that the police have been totally outmanouvered, with roaming demos which have seen the city's VodaFone shop briefly occupied, 400-500 people holding the major Western Road and continuing struggles at the town hall - with the force's Chief Inspector Taylor noting "No other arrests apart from the earlier one for breach of peace."

As the police's frustrations rise, there was at least one anecdotal story on twitter that a student in school uniform has been beaten up by a policeman at Priory House. As the evening wore on, reports came in that Poundland had been invaded, the public transport system had ground to a halt and Western Road had been kettled.