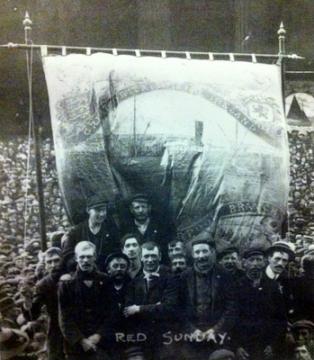 • First off, local historian and BBC Radio Merseyside regular Frank Carlyle gave us an overview of Liverpool's growth as a port city, it's economic development, the influence of immigration and the rise of the city's working-class.

• Then Paul, a member of Liverpool SolFed, gave a fascinating talk on the events of 1911, looking at the influence of revolutionary trade unionism (syndicalism) and referring to radical working-class militants such as Peter Larkin (brother of the famous Jim Larkin) and stonemason Fred Bower.

• The final speaker was Tony, an anarchist and trade unionist for over 25 years and SolFed's international secretary. Tony worked on the railways for 16 years and was also a shop steward involved in numerous official and unofficial strikes. Referring to his experience as a trade unionist, he criticised the hierarchical nature of the labour movement and the tendency of its leaders to undermine rank-and-file militancy. Having lived on the same council estate all his life, Tony rubbished the idea that things were 'better in the good old days', and stressed that anarcho-syndicalists need to fill the vacuum in local communities that trade unions and political parties have vacated or cannot fill. He also talked about how we, as anarcho-syndicalists, are putting our ideas into practise, such as the SolFed member who organised a workers council on the London Underground and the recent successful campaign against Office Angels.

As there was a lot to cram into a two-hour meeting, the time for discussion at the end was unfortunately limited, however the debates and exchange of ideas continued in the pub afterwards.

Liverpool SolFed would like to thank everyone for coming along and making it such a great event, especially to Frank Carlyle and the comrades from Manchester SolFed.

An audio recording of the talks should be available soon. Some pictures from the event are below.

This article was published on 21 August 2011 by the SolFed group in Liverpool. Other recent articles: