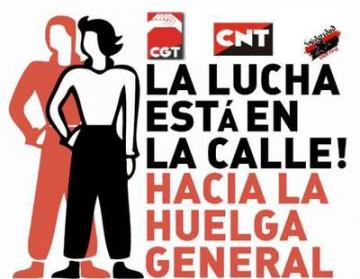 Joint statement by CNT, CGT and SO in Spain

Mobilizations that have become necessary in order to fight policies of cuts in social spending, the dismantlement of public services (healthcare, transport, education, etc.) and the loss of labour and social rights that are currently being promoted by European governments and institutions at the behest of the employers and markets, and also against labour reforms, changes to the pension system and the reform of collective bargaining. Because they want the working class and the most vulnerable sectors of society to pay for the crisis and make sure the capitalist system survives.

The CGT, the CNT and SO recognize the positive nature of the demonstrations of anger and indignation that have been seen on the streets and in squares all over the country, and we call for fresh, united action to be taken.

We call on all trade unions, social movements, popular neighborhood and village assemblies, the 15-M working groups and all workers in general to participate and to come together and endorse a week of protest against the Social Pact and for the General Strike, to be held between the 14th and 18th November and culminating in the call for decentralized mobilizations on 18th November, calling into question an election process designed to legitimize the political class that continues to act against the working class.

It will only be possible to reverse the current measures of the political class in favour of the banking system and large employers and work instead for the benefit of the working classes by developing a strong process of struggle on the streets and in the workplaces.

The struggle is on the streets! Towards the General Strike!

The original Spanish version can be found here.