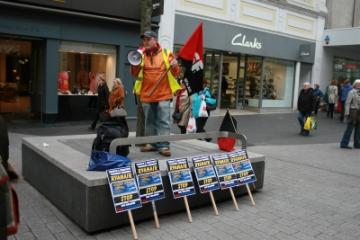 John Foley of the Ryanair Don't Care campaign joined members of Solidarity Federation and the Anarchist Federation in Liverpool City Centre yesterday to hand out leaflets. John addressed the public by megaphone, describing the recruitment and employment practices of Ryanair as around 500 leaflets were distributed.

After the distribution, John provided Liverpool Solfed with an interview outside News From Nowhere bookshop - which has a Ryanair Don't care display in its front window - about what was in store. On Friday, there will be a picket of the Allied Irish Bank and Daniel Silverman Solicitors.

The Allied Irish Bank are an integral part of the Ryanair recruitment scam, providing the loans for the 300 Euro training fee, and ruthlesslychasing it up once staff have been terminated. They also provide the airline with information if any trade union subscriptions go out of an employee's bank account, to sack any worker who contemplates organising. Daniel Silverman Solicitors are also complicit, chasing up terminated staff for the training fees and helping Ryanair to rob exploited workers of every last penny.

Saturday will see a protest at Liverpool John Lennon Airport, one of the main locations that the airline fly from. Details of that protest can be found here.

Other targets of the week of action include recruitment agencies through which Ryanair hire staff, and airports that they fly to across the globe. The campaign is also urging pickets during the Ryanair Chase at Cheltenham on Thursday, though John Foley cannot take direct action at the event as he has before thanks to an Anti Social Behaviour Order placed on him in Liverpool.

This article was published on 13 March 2012 by the SolFed group in Liverpool. Other recent articles: