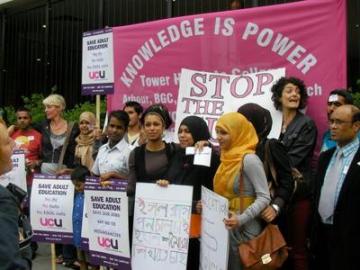 While the recent media spin is suggesting that we’re ‘on our way out of recession’, the reality on the ground is that workers are still facing attacks across sectors in the forms of job cuts and community provisions. Education has been one of the sectors worst hit in this period, with £65m slashed from higher-education (HE) budgets, schools closing left, right and centre, and jobs to go at approximately 100 of the 150 HE institutions in the UK . The situation is as bleak as ever.

In August, around 250 members of teaching staff at Tower Hamlets College (THC), East London went on indefinite strike over threats of compulsory redundancies, and cuts in provision of ESOL (English for Speakers of Other Languages) courses. Catalyst spoke to Rachel, a member of the striking staff, about the background of the dispute, the issues at hand, and the feelings after the strike came to an end in late September.

We began by discussing the background to the strike, going back to June of this year, – “There was new management, a new principal, new senior managers … and in June they issued a document ‘Securing the Future’.” The nature of this document turned out to be a plan for “very brutal cuts in provision and jobs, and on June 5 there was a 30 day notice for consultation”, with the projection in June being that “40-60 jobs in THC would be cut, while approximately 50% of ESOL course places would also be lost, and some in A-level teaching.”
Prior to the attack on jobs and provision, Rachel said that she had experienced “good working conditions with a strong union … we were comfortable”. But that all changed, and with a suddenness typical of many disputes, the plans to cut jobs and ESOL provision were an aggressive assault on the workers and students. Management were strategic in their timing – “proposing to do it all at once, and at the end of term so it was hard to do anything about it… coming up to exams, most of teaching finished for the summer” – indeed the choice of timing had put the workers in a more difficult position to fight back, but they had no choice.

Campaign against cuts
“A campaign started against the cuts, they were talking about 60 people being made redundant but they offered voluntary redundancy and a lot of people took that – which was unfortunate but meant fewer compulsory redundancies”. The campaign began right away, and on 27th June in Bethnal Green, a demonstration of workers, students, and supporters marched to Altab Ali Park in Whitechapel.  In addition, staff and students were writing letters in anger at the proposed job and course cuts, but it was clear that direct action would be the only way of fighting back if the workers were to have any hope of defending themselves.

In early July, the attempts to formalise the redundancies had become more concrete. Rachel told us of a “letter sent by courier at night” which targeted 19 people at that stage for compulsory redundancy, which had made a ballot for indefinite strike action all the more vital. In the meantime, over the summer weeks, some people accepted voluntary redundancies, and some appeals had continued between July and August.

Strike ballot
The teaching staff, who were members of the University and Colleges Union (UCU), decided to step-up the fight-back. “We balloted for strike action in late-June and we had a series of one-day strikes toward the end of term”. While feeling that in and of themselves they were ineffective in combating the cuts, Rachel says this was a useful process; “it was a way for people from the different sites to meet and discuss things… we then had an unofficial union action – we refused to take part in a staff development event that we had been required to do- this brought people together”. The same day, staff voted for indefinite strike in September.

The strike was due to start on 27th, August, before students began to enrol for the new academic year – “were we going to be able to carry it out from first day of term?...we had a union meeting first day of term” and they affirmed the strike from then on. Rachel described some of the debates and internal dynamics involved – “some people thought we shouldn’t do it during enrolment because of students, since the college has competition from other 6th forms, but we decided to do it anyway”.

Student support
From the beginning of the campaign students were on-board with the staff action – “students did show support…at Poplar [another THC site] students respected the picket line and on the adult sites they mostly didn’t cross the picket line. We took great pains to make sure they could understand. The students knew us and they knew what it was about.”

The strike
During the strike Rachel says feelings of solidarity were high - “morale was fantastic… there were so many on picket-lines and doing other things and people feeling good… busking, collecting, daily meetings, not much problem with scabs”. The busking and collecting helped the strikers to support themselves financially during the month they were out.

“We got strike pay from national union (UCU), but we don’t quite know how much for full-time staff. There were 250 people on strike; we were able to collect a lot of money, about £20-25k, through colleges and workplaces, especially FE colleges, and places like local fire station. There was a hardship fund and any striker can say ‘I need this much money’ on the basis of trust and solidarity.”

Mixed results
“In the end officially there were no compulsory redundancies, but in a few cases I saw them as compulsory because certain people were selected through a scoring process, put through a meat-grinder, going over summer, in the end offered redeployment/demotion or voluntary redundancy.” Basically some had been forced into taking ‘voluntary’ redundancies.

“Six teachers got their jobs back… seven people I believe took voluntary redundancy. Nothing else was included in negotiations about what happens next.” Rachel was very honest about the shortcomings, but she does feel that the gains that had been made, which were mostly in confidence terms, are worth building on. Despite the feeling that they could have achieved more, she says, “we are strong going back, heading to more of a shop-steward model. If we keep that going where we can meet and continue the feeling of strength.
“I think people thought we couldn’t stay out too much longer. If we carried on we’d be divided. I think people want to feel good about it and we did accomplish a lot. It could have been much worse without our action.”

So was it a ‘victory’?
In the immediate aftermath of the vote, Rachel had written on the class struggle website libcom.org that “this deal was sold through with the most outrageous manipulation of the mass meeting where discussion was suppressed before and during the meeting as far as possible, with members being shouted down by union officials.

“In the short time there was for debate, many people spoke against accepting the deal but in the end there were 24 votes against, many abstentions and the clear majority voting to accept and go back to work. (though the meeting was of course smaller than our usual weekly meetings).”

Having had a few days to reflect on the outcome by the time we spoke, Rachel was acknowledging that there were positive elements in the outcome. While compulsory redundancies were defeated, and this would also mean some ESOL provision would be saved (though not nearly as much as the 1,000 places under threat), Rachel and many of her fellow strikers are not getting carried away in the euphoria expressed by some on the left and higher up in the UCU.

“It was quite a bittersweet thing. A lot of people don’t wanna talk about it as a victory – we could have done more heading back to work , but we feel great about what we did… I think at Poplar you’ve got an SWP branch, they were the ones that kind of ended it when it ended. They wanted that result and got it in the mass vote – ‘This is  a great victory lets go down to the Brighton Labour party conference.’ But cracks have started to appear very quickly in those celebrations.

“People feel it’s a mixed bag. It’s not just me – 24 of us voted against going back. I didn’t think we could stay much longer, but the vote wasn’t done in the spirit that other meetings had been done.”

The action by teaching staff has had a ripple-effect in terms of other staff – “the Unison people were promised no compulsory redundancies because we were on strike.” So despite the mixed feeling concerning the outcome, the are definite positives that should not be under-emphasised.

Rachel made clear that while she felt the THC workers could have held out for more, it was only through taking their action against the bosses that they were able to make the gains they did. A feeling among many of the THC staff that were on strike is that they learned the value of fighting back and standing side-by-side in solidarity with each other – had they allowed these attacks to go unchallenged, they’d certainly have been in a considerably worse position. While there are many lesson to be learned from the strike, Rachel felt that many of her colleagues gained a sense of confidence in what they could achieve when they took collective action, and in times when indefinite strikes are almost unheard of, the THC workers have set an example for workers everywhere.

The fight-back in education is on, and there have been glimmers of hope. From THC to the victorious parent-led occupation at Lewisham Bridge Primary School (see page 3) winning an education for their children, examples are being set for workplaces and communities under attack: the only way we can defend our interests is to fight for them. One of the lessons learned has been that it was not the union that ‘won’ this ‘victory’ for the Tower Hamlets strikers; it was the collective action and solidarity of the workers themselves.

In a support leaflet for the strike, the London Education Workers’ Group said, “The Tower Hamlets strikers have set a fantastic example for the rest of us in education to follow. Through their direct action and solidarity they have shown [principal] Michael Farley and all those seeking to make cuts in education that we will not go down without a fight.”

Rachel has been very honest about the shortcomings after the strike, but the most important thing coming out was the sense of confidence and solidarity they felt going back to work, and no-one can take that away from the Tower Hamlets College workers.
Catalyst thanks Rachel for taking the time out to chat about her experiences.