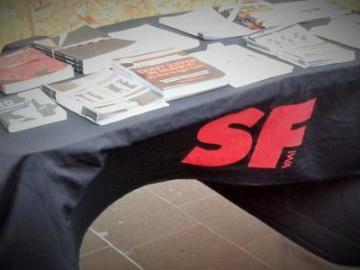 SF have once again appeared on the streets of Liverpool after an absence of more than two years. Recently joined members have moved into the city, and have been in contact with the Manchester local.

So, at the end of last week, SF members from both cities organised a literature stall and leafletted members of the public. We met with a generally positive reception from passers by, with one giving us a donation, a few taking additional literature for their mates and 'Stuff Your Boss' getting its usual amused response.

One less favourable response came from a nearby building site manager, who objected that the city council doesn't allow leafletting. When we explained that we weren't going to move on for him, he made a great show of phoning the council to get the police on to us. Anyway, the 'busies' must have been busy and nobody bothered us for the rest of the time we were there.

We will be back again. For anyone in the Merseyside area interested in SF, you can contact Manchester SF (see the contact form on the home page) for the time being.

This article was published on 8 December 2015 by the SolFed group in Manchester. Other recent articles: