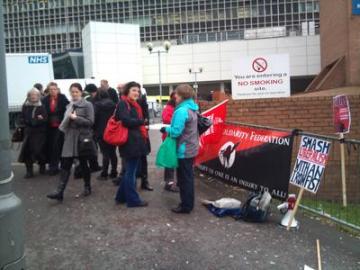 Around 50 people joined a demonstration outside the Royal Liverpool Hospital against the privatisation of the NHS. Members of Solidarity Federation, the Anarchist Federation, Women Against The Cuts and the Socialist Workers' Party were all present, along with a number of unaffiliated individuals who supported the cause. Despite the wind and rain, it was a lively gathering which drew in a fair amount of support from the public and service users.

A demonstration had originally been called by the Liverpool branch of the Labour Party. From the start it was a very sectarian, party political affair - with Andy Burnham MP as a speaker and the tagline "the NHS is only safe in the hands of The Labour Party - join us." However, rather than "join Liverpool Labour Group Councillors & Members of Parliament," members of Liverpool Solidarity Federation decided to mobilise a turnout for the demonstration which was both against NHS privatisation and against the Labour Party.

This led to Labour desperately scrambling to bus people in from Manchester, fearing they would be outnumbered. This clearly didn't work and they soon instead announced that the demo was cancelled, citing "public safety" concerns. As a consequence, the UNISON branch in the hospital - of which Labour Councillor Jake Morrison is a member - also pulled out. Keep Our NHS Public and the Liverpool Socialist Singers soon followed suit, though there was disagreement about this in the latter group.

This doesn't mean that those of us who are both anti-cuts and anti-Labour will be staying at home, though. If it did, it would only show us as standing for the same narrow, sectional interests as the Labour Party when that is not the case. The ruling class is determined to roll back all of the gains made by workers in the last century, and we stand opposed to that whichever party holds the seat of power.

At the beginning, there were about fifteen people at the demonstration. This escalated quickly enough to fifty, from a variety of organisations, rallying against the privatisation of the NHS. None of those present were surprised - or bothered - by the absence of the Labour Party and its parliamentary stooges.

Solfed members handed out 800 copies of this leaflet, making the point that only direct action - not voting - can stop the NHS reforms. It was very well received, with a number of people stopping to talk about how bad the proposed changes were and thanking us for making a stand against them. Some people made comparisons to the 1930s, before the NHS came to be, whilst others talked about the system in the US - where having an operation to save your life could genuinely see you bankrupted.

The only moment of contention came when a senior manager from within the hospital said that we couldn't demonstrate on hospital premises. The Labour Party had sought the Chief Executive's permission, and now that they had pulled out that permission was removed. He was placated, however, by a banner being moved from one railing to another and soon left.

After two hours, and with weather conditions starting to worsen substantially, the demonstration wrapped up. In all, it was a quite succesful event - with all of our leaflets handed out and lots of public support for the cause. It's not going to save the NHS, of course, though with luck it may get people thinking about the best way to do this. But it does hammer home the message that if we want to fight back we need to do it ourselves, not wait for leadership from the likes of the Labour Party who are only in it for their own gain.

This article was published on 27 January 2012 by the SolFed group in Liverpool. Other recent articles: