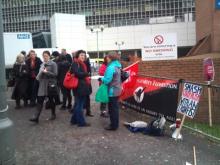 Around 50 people joined a demonstration outside the Royal Liverpool Hospital against the privatisation of the NHS. Members of Solidarity Federation, the Anarchist Federation, Women Against The Cuts and the Socialist Workers' Party were all present, along with a number of unaffiliated individuals who supported the cause. Despite the wind and rain, it was a lively gathering which drew in a fair amount of support from the public and service users. 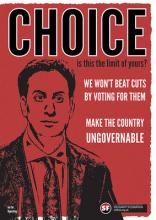 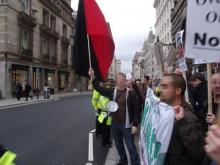 This is a letter written by Liverpool SolFed and printed in the Liverpool Echo newspaper yesterday (6th July 2011).

Joe Anderson, the leader of Liverpool City Council, is trying to paint himself as some kind of anti-cuts rebel. In January he joined an anti-cuts march in Liverpool, not long after he wrote to David Cameron to withdraw Liverpool from the Big Society, and then had the cheek to lead a march against cuts in February. This is nothing more than cheap political opportunism, and it should be rejected.

He tells us that the council is “bracing itself” for the cuts. He “warns” us that compulsory redundancies in the council will come. He is “incensed” by Liberal Democrats accusing him of having a “politically motivated” approach to job cuts. 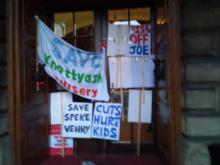 ‘Automatic' union recognition is here at last. But all the signs are it is far from automatic'.

The much-heralded legislation giving unions the right to force employers to negotiate over hours and conditions is now in force. But, as so often is the case with New Labour, it doesn't add up to much.

Over 5 years on, and life under Labour is in many ways been worse than it was under the Tories.

The Labour government since coming into office has embarked on a strategy of forcing people into ever-more casualised, low paid jobs. Sure, it is all dressed up in the language of empowerment. Young people, single parents and now the unemployed in general have all found themselves empowered into jobs paying just over £4 an hour.

Remember the Tories looking after the rich at the expense of the poor? Remember the jubilation when the Labour Government was finally elected in 1997? Remember all the promises? Well, the latest research from the Institute for Fiscal Studies says the total poverty gap - the total income by which families fall short of the poverty line - has increased under Labour.

The report concludes that children who live in the poorest UK households have less of a chance of escaping poverty than when Labour came to power. Yet, child poverty is one of Labour's key targets, and has been at the heart of the political agenda since 1999.