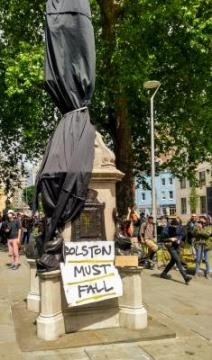 We would like to offer our full support and solidarity to BLM protesters around the world fighting for racial justice, against white supremacy and police brutality. We would also add that we offer solidarity to protesters involved at the protest in bristol last weekend who are being investigated by the police for doing something which should have happened decades ago, toppling the statue of the racist slaver Edward Colston.

When protesters, who joined the Bristol’s Black Lives Matter demonstration, toppled Edward Colston statue last week they probably didn’t conceive the impact their symbolic act would have. They tore down a statue and helped push discussions around race and history in a new direction. These views voices on Britain’s colonial and economic past have become central to the dialogue.

However, at the end of the day, the fall of Colston’s image was not the fall of the institutions that construct and reinforce Britain’s class and racial inequalities. The justice system, including policing, the courts and the prisons, the education system, the health service, the controls over immigration and borders, our workplaces and other areas of social activity. These is where we must renew our efforts. But we are not taking about reform. The class system, and the racial divisions used to underpin it, are corrupt and beyond improvement. We need a new world and we need to start building it now.

Bristol SF supports all those that attended last weeks Black Lives Demonstration. We support all those that pulled down the statue of slave trader Colston. We believe in the central ideal of direct action. The deed of pulling Colston off his plinth ended the needless bowing down to the forebears of the beneficiaries of slavery and a serious of compromises that allowed him to continue looking down on us.

Now though we have new challenges. We must stand shoulder to shoulder with anyone charged over the events that day. We should not make it easy for the state. So do not share information or images with the police. If cases go to court we should attend and offer support. We should ensure that those in court get excellent representation. Maybe, just maybe, a jury of peers may be persuaded that they were not breaking any laws but enacting the will of the people of Bristol.

Those who may face a visit from the police about the events on this demonstration should prepare for this. The following advice is complied from information from Netpol, Bristol Defendant Solidarity and Legal Defence and Monitoring Group.

Firstly do not turn yourself in. It makes their job easier and will help you at all. Then if you are arrested do not say anything. Make sure you read further on your rights in custody. Make sure you have details of a solicitor who can represent you and do not take the duty solicitor. Netpol has a list off solicitors with experience of working in the areas of protest. You should get rid off any distinguishing clothes you were wearing on the day including shoes. Be careful what you say to others about the day and what you may say on-line.

Here are links to more in depth information.

This article was published on 16 June 2020 by the SolFed group in Bristol. Other recent articles: