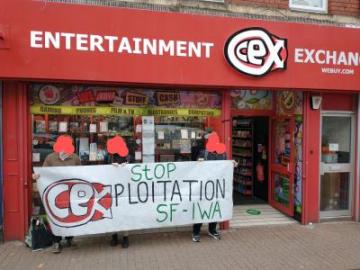 We posted recently about the IWA’s campaign against exploitation at CEX. Afterwards, a former CEX employee contacted us and told us their story. While working at CEX they witnessed illegal age discrimination, unequal pay, abuse of zero-hour contracts and punitive demotions.

If you work for CEX and you’ve experienced anything like this, then get in touch with us. We can help you fight back.

This is the worker’s story:

“Me and another supervisor was advised to try and exploit the 0 hour contract when hiring new candidates by the franchise manager. He would tell us that we need to hire younger people because he can pay them less and also they can work more hours then some one is is in there mid 20’s.

At the time we had a guy working there who was 27 (we was all on minimum wage at the time) and he was only give between 4 to 8 hours a week because of his age.

The same manager owned a branch in […] he had recently hired a new supervisor for that branch, and he was a lovely guy.

The new supervisor to be had recently been accepted for a mortgage and had to write up how much he was earning on his supervisory wage and they accepted it on that basis.
Only two weeks after this the manager decided they wanted some one else and brought in a more experienced person to fill the job and demoted the former person to a sales assistant just on that basis.

The regional manager for the company who was the manager for […] for a few years asked to put on a higher salary to fit his role and was told to look else’s where in a sense.

When I told the manager I’m leaving for a better paying job he offered me a managers role for sixteen grand per annum.
I said to him at the job I was moving to I’ll be getting more then that and he told me to go there then.

One younger age lad we had at the time was exploited during the Christmas holidays.
We would normally get our rota a few days before the next week and so we couldn’t plan much around it, but the younger lad who was at college at the time said to the boss it’s end of term now I wouldn’t mind a few more hours, and then all over Christmas he was pretty much in every single day because he was so low paid and the boss could exploite that.
To put it in perspective he worked more hours then me at the time and came away with a lot less money.

The boss would try making things better by taking us out once a year for Christmas but then would revert back to being the corporate ass who only cared for kpi’s and getting us to burn our candles from both ends.”

This article was published on 10 November 2021 by the SolFed group in Bristol. Other recent articles: