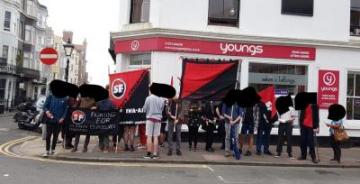 Whilst the landlord is unwilling to pay compensation to Patrick for the stress of living with collapsing ceilings, with a bedroom that was uninhabitable for nine months, for ongoing issues with rising damp and dry rot, mould in the kitchen, damp in the bathroom and kitchen ceilings, damp and rotten window frames in the kitchen, and damp in the outside wall (as was found by an inspection by the council’s Environmental Health department), as well as having to deal with a letting agent – David Pay – who assaulted a Brighton SolFed member and whose son forced his way into Patrick’s house and assaulted him, he is apparently happy to pay out money on a failed attempt at eviction, as well as on a law firm, Dean Wilson, who are based in Seven Dials, to try and get it right the second time. Youngs also continue to administer the property on behalf of the landlord, in spite of everything outlined above.

Patrick has lived in the flat for over a decade, and needs to be in the area to provide daily care for his elderly mother, so both Patrick and ourselves are determined to fight the eviction. Landlords and lettings agencies might have money and the law, but we have the solidarity of tenants supporting one another, which we know is more powerful. However, this new situation means that Patrick might incur some costs, either in court or from moving house, over the next couple of months. For this reason, we’ve started a GoFundMe campaign to raise some money for this. If able, you can make a donation at: https://www.gofundme.com/patricks-housing-fund

This article was published on 14 August 2018 by the SolFed group in Brighton. Other recent articles: