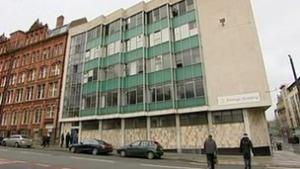 On Sunday 8th January 2012, Merseyside Police attempted to illegally evict Occupy Liverpool from their city centre squat. A member of Liverpool Solidarity Federation was in attendance to observe and lend assistance to the occupiers.

After seeing the call for help on Facebook I arrived around 5pm to find occupiers in the street confronting police near a yellow Matrix van following the arrest of 3 of the occupiers by plainclothes officers who didn’t identify themselves properly.  I learned that the occupiers had left the building voluntarily to talk to the police and had subsequently been arrested on suspicion of the possession of a controlled substance. After arrival I had noticed a couple of large men in track suits standing to one side, watching the proceedings. They stood out a mile as EDL and I asked several occupiers if they recognized them. They didn’t seem to be taking photographs or filming anybody at the scene so we decided to ignore them for now.
Police were standing guard at the entrances to the building but were, of course, unable to gain access. Section 6 notices had been taped to each entrance. Police were also denying access to anybody on the street, declaring the building to be a crime scene.  When quizzed about what the crime was, the police refused to answer.  More police arrived and there was now probably 20-30 officers in attendance, including several Matrix vans and dog units. Following a short impasse, occupiers inside the building requested food and water, which was then brought to the site by occupiers on the street. Formal permission to pass the food and water into the building was requested and refused, and anybody attempting to pass food and water into the building was threatened with immediate arrest under again unspecified laws. Officers were dispatched to each window on the ground floor to physically prevent food and water being passed in.
After communication with legal representation an announcement was made that the occupiers inside the building were entitled to food and water, and an attempt was made to pass the food and water into the building. This was met by an immediate and unnecessarily violent response by the police in front of the windows. The bag of food and water was ripped from one occupier’s hands and police began to get physical with several people on the street before being forced to retreat back to the windows by the now angry crowd. It was at this point, as tensions threatened to boil over, that the officer(s) in charge approached their subordinates and gave the order to stand down. The police beat a hasty retreat back to their vehicles and began to leave, and we were then successful in quickly getting the food and water into the building. One woman on the scene, accompanied by several occupiers, was invited to talk to the officer in charge and was assured the police wouldn’t return. This was taken by many with a pinch of salt. At this point we learned that the three arrested occupiers had now been released and were on their way back, and I had it confirmed to me that someone had recognized our track suited friends as EDL. They left as soon as the police disappeared.
Morale seemed high and the occupiers seemed determined to carry on in some form. I also had an in-depth discussion with somebody who had turned up to help about squats in Liverpool and the possibility of turning squats to a positive social use in addition to providing shelter for those in occupation. I left at around 9pm, but not before several drive-bys from the police in cars and Matrix vans. A possible indication of a police strategy of intimidation over the coming hours, days and weeks. The occupiers will need to remain vigilant.
Addendum: Since this report was originally written, police have returned to the squat and again attempted to gain access in violation of Section 6 but left when a BBC TV crew arrived.

This article was published on 10 January 2012 by the SolFed group in Liverpool. Other recent articles: