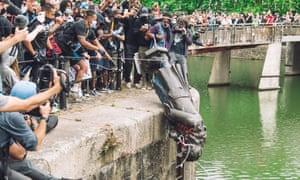 We offer our solidarity and compassion to the people in the US and UK bravely resisting the structures of white supremacy and systemic anti-blackness which are endemic in our societies. The murder of George Floyd has furthered a global movement which is provoking tangible change in many countries. Resist the media narratives of chaos and brutality; these protests are courageous, well-organised actions by communities seeking to abolish the structure of racist state violence.

We support the destruction of symbols of white supremacy such as the Bristol slave merchant statue. These symbols are a daily exhibition of the racist values of British society and we applaud the action of the Bristol protesters in taking back their public space. We fully stand alongside the further removal of all racist monuments from public spaces.

Even in the midst of such anguish, the structures of anti-blackness encourage a reductive view of black communities that erases LGBTQIA+ people and women. This is something we must recognise and resist. Other black people recently slain at the hands of police include Breonna Taylor and Tony McDade. Although Breonna Taylor was killed only weeks before George Floyd, her death did not elicit global media coverage; it is important that we recognise misogynoir where it looms and #sayhername. We must also recognise the transphobia at play when Tony McDade, a trans man, was misgendered in reports of his death by the press. The intersection of their respective identities with their blackness results in them facing more injustice even after their deaths.

It is paramount now to reach out to your black friends, family and workmates to offer them emotional, practical and financial support. Simple actions like cooking someone a meal, collecting medication or giving space to the black people in your life to vent and share their experiences can make a real difference.

We would encourage those thinking of joining protests to remain cautious as these can be particularly unsafe for black people and people of colour. If you are thinking of attending, BLM UK has some good safety advice [https://www.facebook.com/BLMUK/posts/1610180805797556].

Although we are rightly angry at the systemic violence black people face in the US we would like to stress that the UK is equally complicit in such brutality. Whilst the history of race and racism in the UK is different from the US, it is no less deadly. As a nation built on the legacy of slavery, empire and the exploitation and demonisation of migrants, the UK is systemically racist.

Systemic anti-blackness in the UK is black people being twice as likely as white people to die in custody – a rate that is almost as high as that of the US. However, their deaths are often forgotten, their names unspoken. We say them now: Sarah Reed. Joy Gardner. Sean Rigg. Mark Duggan. Sheku Bayoh. Edson da Costa. Rashan Charles. This list is far from complete.

Systemic anti-blackness in the UK is seeing black people four times more likely than white people to die from COVID-19, with poverty, increased exposure and medical racism believed to be factors.

Systemic anti-blackness in Sussex is black people being almost 11 times more likely than white people to be stopped and searched.

We encourage you to donate to the following organisations and bail funds:

For more information on the criminalisation of black people in Sussex:
http://www.stop-watch.org/your-area/area/sussex

For more information on state violence against black people and people of colour in the UK:
https://uffcampaign.org/
https://www.inquest.org.uk/

This article was published on 11 June 2020 by the SolFed group in Brighton. Other recent articles: