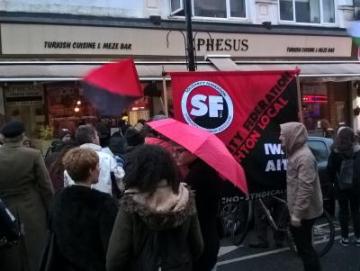 Our dispute with Ephesus has come to an end with a victory; the worker has been paid all that was owed.

Solidarity from many people has been the key to attaining this result.

From the outset the worker, who is also involved in the Spanish Marea Granate movement, wanted to find a way to collectivise the dispute and try to improve the conditions for their fellow workmates even though they were leaving. As the notice period finished, the worker asked for all their holiday pay and if they were going to receive the money owed for minimum wage. All they were offered was a measly £150. Management hoped this would keep the worker quiet.

We delivered the demand letter as a group, including the worker. We were received with smiles and “yes yes yes.”  We left and awaited their response; we gave them a week before the deadline was up.

The deadline conveniently fell on International Workers Day, the first of May. We organised a demo alongside various groups in Brighton, including Brighton Anti-Fascists, Deliveroo riders in IWGB, members of Plan C, Precarious Workers Brighton and Brighton University Alternative Students Union. Roughly 150 of us marched through the streets to show the management and owners of Ephesus what solidarity means.

We were met with a line of police officers and police vans that blocked the street. We made our intentions clear; we wanted to speak to management and demand they pay up. Ephesus management were no longer smiling but trying to plead that it did not have to come to this although up until now we were ignored. The workers initial nervousness turned to strength and passion as they berated the management and demanded what was theirs. We left the restaurant to applause and chants of ‘solidarity forever’. Different groups in disputes came together on Mayday and we all felt the support for each other. The worker spoke on the microphone to thank all who came and exemplify that our power against the bosses is evident when we come together and fight together.

Following this action the restaurant emailed us. Belated payslips, altered contracts, accountant statements, all trying to justify their poor employment practice. They claimed that the worker’s 4 months’ employment before the altered written contract was just a couple of trial shifts, a blatant lie not only did we know but they knew.

We commenced a communication blockade, with the help of SolFed locals across the UK. This continued to annoy Ephesus, but with no result.

Another picket commenced, 30 of us from Brighton SolFed, Marea Granate, Brighton Anti-Fascists and supporters made our presence known. This raucous picket started with us talking to management and handing flyers out to customers eating. Once the owners arrived we were kicked out of the restaurant. They were at their limit, outraged we were demanding the bare minimum, how could the worker and SolFed do this to them? The police were called. Tensions escalated once an owner tried to push over one of our members who is visually impaired. The police called for back up, the street was shut down and the stand-off continued. Once we had finished chanting, handing out leaflets and encouraging the supportive diners and members of the public to complain to Ephesus, we left. The various groups celebrated a good picket and came together.

The following day, some of the holiday pay was paid but by no means the full amount. Two days after the picket, management called for a meeting with the worker. Initially they wanted to meet the worker on their own and in a park, obviously tactics to try intimidate the worker in some way, but we ensured the they were not alone and arranged to meet in a neutral place. The meeting involved one of the managers trying to weasel their way around paying and exclaiming that we were wrong. Alongside this, they tried emotional blackmail, played ignorant and even threatened us with either legal action or some mysterious other action to match our own. He tried to finish the meeting stating all we had to do was make an offer, while we reminded him that it was not up to us to make an offer and that we have demanded the minimum that was owed.

From this, many SolFed supporters tweeted Ephesus directly to continue the pressure. The next day the restaurant rang the worker and offered a bit more, then after refusal, a little bit more. The worker stood strong and we supported them. The worker then had a stroke of genius; they would accept a lower amount if the rest of the money was split among the rest of their workmates and not management, failing this the campaign would continue (we had already planned the actions to follow). This act of solidarity would have encouraged the workers to demand more and show that the bosses were not unbreakable. Ephesus saw this potential and caved in immediately, paying the worker the full amount owed in holiday and minimum wage pay.

Following this, the worker met some of their ex-colleagues and found out that Ephesus is starting to issue everyone with proper contracts and their practice is changing. We shall see how far they go and encourage any workers to get in contact if they need help organising against or fighting their bosses.

The most endearing element of this dispute has been the solidarity between groups and individuals. Witnessing the worker feeling empowered to take on the bosses face-to-face. This dispute ended with smiles all round, from us at least.

This article was published on 23 May 2017 by the SolFed group in Brighton. Other recent articles: