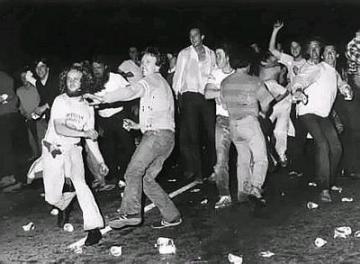 On June 28th in the year 1969 the neighborhood of Greenwich Village burst with anger.

The patrons of the Stonewall Inn, a substantial gay venue of the time, were a community of people that lived beyond societal expectations of gender and sexuality. They were people who were gay, trans, bi, in drag, homeless - people who, like other “minorities”, could not be integrated in the new American capitalist society and were in the gap of a cultural crisis of the ruling class. Moreover many of the LGBTQ community also belonged to other marginalized identity groups, for example the LGBTQ Black and Latino communities, and so were further maligned.

At the time those living their lives outside the confines of the traditional heterosexual family framework paid a high price for their way of life; electroshocks, castration or lobotomies were standard practices intended to ‘cure’ the 'depraved', in addition to those practices  people suffered from violent treatment and imprisonment at the hands of the police and parapolice forces. Like other “minorities” sexual dissidents were in a unique position to clearly identify their class enemy.

On June 28th 1969 the New York Police and their ‘moral squad’ made the umpteenth raid in the Stonewall Inn bar in Greenwich Village, New York, and those within it exploded in anger. People who lived their existence outside conventional ideas of gender and sexuality, plus many more, decided to fight back and take revenge for the years of violence and humiliation they’d endured. Thousands retaliated against the police igniting massive riots. This event was the birth of Gay Pride.

However Brighton's Gay Pride celebrations have little to do with that event. On 1969 people took to the streets but nowadays event organizers charge an entry fee to get inside enclosed parks and neighbourhoods. On 1969 people fought back against the police but today a rainbow flag waves outside the Police Station, insulting the memory of Stonewall rioters. Times have changed and great opacity is required to glorify the current establishment. Today you can choose a sexual orientation as a consumption option. The more money the more options. Nowadays that’s what we call freedom.
The truth is there have always been two types LGBTQ movements. One that wants LGBTQ people to be integrated into the capitalist society and another that wants to destroy such a society. The latter does not see the oppressions of the LGBTQ community as being unconnected to the pressure that a class society exerts in all areas of our lives. Its struggle is the struggle of the oppressed.

However, according to the official LGBTQ representatives we should be Proud to live in a civilized world. For them one should take Pride in being a politician, an employer, a soldier or a police officer. For them Pride is a celebration but more than anything it is a very profitable business.

This week Brighton will be one of the best examples of the docile Pride. Thousands of tourists will come, the streets will become a party (an expensive party) and the hospitality industry will generate huge profits by exploiting its underpaid and overworked staff.

On June 28th 1969 Greenwich Village exploded in a burst of anger... and in Brighton there are a lot of angry people waiting for an explosion!

THIS SATURDAT WE WILL BE AT THE OLD STEINE GARDENS FROM 11AM, COME TO CELEBRATE A DIFERENT PRIDE!

This article was published on 30 July 2015 by the SolFed group in Brighton. Other recent articles: