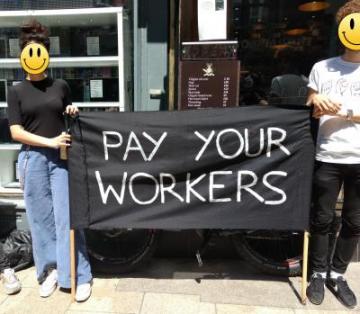 CJ Barbers yet again resorted to violence against union members on Thursday as our campaign to get our member’s unpaid wages back continues.

In a remarkable demonstration of aggression, the owner Hamid Karam and the manager Cyrus Shabani smashed up their own wooden chairs in the middle of the road, wielded the remains at picketers, pushed and hit multiple people, and choked one member before throwing him across the street in front of traffic. They also snatched members’ phones out of their hands as they were filming the disgusting behaviour, smashing one phone in the process.

Fortunately, none of our members have been seriously hurt. Nobody other than the manager and owner of CJ Barbers participated in any acts of violence. The incident caused traffic in the street to be blocked for around fifteen minutes.

In an additionally bizarre escalation, Mr Karam stripped half-naked in front of a bus he had stopped, bellowing and swearing loudly about his taxes. Both men shouted very loudly and aggressively and swore, despite entreaties from passers by to stop due to the presence of children nearby.

This is not the first time our members have been assaulted by Mr Shabani or Mr Karam. Last week, a female member was grabbed and pushed at a picket, and they have made death threats against members on previous occasions also. This on top of their attempts to slander and blacklist the worker, as reported on this site previously.

Brighton SolFed utterly and unreservedly condemns this use of violence against workers who are standing up peacefully for their rights. We call on the friends of CJ Barbers to pressure them to meet our very reasonable offers of negotiation, which have so far all been rejected, and not to condone the perpetuation of any further violence.

We held another picket this morning which was very successful, with no acts of violence from the business. We received a lot of support from local residents, including people who had seen or heard about the disgusting actions on Thursday. No customers entered the shop whilst the picket was ongoing.

We will not be intimidated by acts or threats of violence, which have no bearing on the fact that this business owes its worker over £2800 in unpaid wages.

We will continue to escalate our campaign, things will only get worse for CJ Barbers if they continue to refuse to pay their worker the minimum wage.

This article was published on 22 June 2019 by the SolFed group in Brighton. Other recent articles: