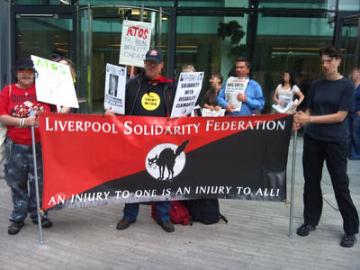 As with the last time we picketed the office, the response from the public was a positive one. With a larger turnout and more signs on show, it was also a lot easier to draw people's attention to what was going on and pique their curiosity so that they took a leaflet.

But, of course, handing out leaflets isn't the end of it. People continue to suffer as a result of the assessments delivered by Atos and the pressure needs to be maintained on them until this despicable practice ends. This week of action will no doubt not be the last, and we as others are determined to make the voices of the most vulnerable heard.

This article was published on 10 May 2011 by the SolFed group in Liverpool. Other recent articles: