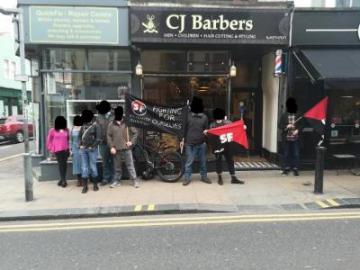 However, in recent posts, Mr Karam has threatened that: “We will spread every single picture of this person to all businesses in Brighton to ensure they protect themselves from being a target”.

As well as being a flagrant violation of both GDPR and the Employment Relations Act, such an act of intimidation of a worker demanding that the get paid for work they did shows the lengths that bosses will go to to avoid paying workers for their labour.

However, some of the comments that Mr Karam has made go even further. On one post dated 4th May 2019, a friend of Mr Karam’s, Alexander Hole, advises Mr Karam to:

“Register [the SolFed member’s] name as a domain. Use a service outside the EU for the domain registrar. Then register the hosting in one of the Stan’s. little Wordpress site - make sure he sees it by creating a twitter and Facebook account from the email address associated with the domain.

Once you’ve got a good picture and his address I’d get a load of flyers printed suggesting he has a history of sexual deviant/molesting/flashing etc and then I’d post them through his neighbours doors. Maybe make the photo look like an efit image then put it up in his local newsagent.”

Rather than challenging this outrageous suggestion, Mr Karam thanked Mr Hole for his comment. He then, further down the comment chain, proceeding to post pictures of the worker as an attempt to out him as a union member.

Of course, these threats will not work, and ultimately serve to further discredit this already disreputable outfit. SolFed and our member will not give in to this kind of intimidation, and our campaign will continue until CJ Barbers pays their former worker what he is owed.

This article was published on 23 May 2019 by the SolFed group in Brighton. Other recent articles: