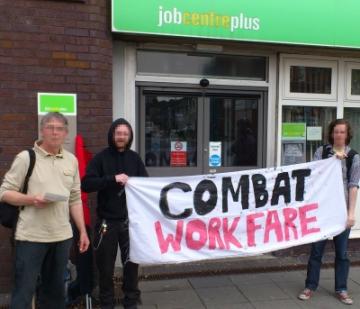 Given the responses that we got today, we will look to return to Bootle in the near future with more high profile action. We will also be looking to expand our Jobcentre-specific leafleting, which has so far occurred in Wavertree and Toxteth as well as Bootle. Workfare is an issue affecting people everywhere, but particularly in those areas hit by greater levels of poverty and unemployment. Talking to and empowering those who face having to do it is always a valuable first step towards succesful actions.

In the meantime, this Saturday we are holding another day of action against workfare providers in the City Centre. We urge everyone who can to come along and get involved. Even if you can't make it, there will be a communications blockade of Holland & Barrett - one of the prime targets of the Solfed campaign - that you can take part in from the comfort of your own home.

The fight against workfare is really gathering steam now, and people are really starting to get behind it virtually everywhere we go. The task now is to keep up that momentum, and bring welfare-to-work in all forms to a halt, once and for all!

This article was published on 20 June 2012 by the SolFed group in Liverpool. Other recent articles: