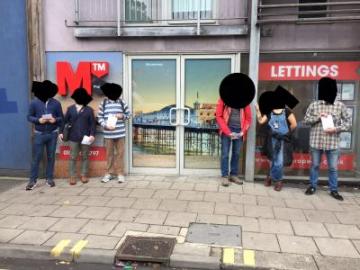 Brighton Solidarity Federation has started a dispute with MTM lettings on the Lewes road. A group of tenants have been organising with SolFed after they were rented a house with serious damp and mould problems, infestations, and poor furniture that the landlady had promised to replace.

The tenants were introduced to the landlady by a different letting agency in the city, which was intermittently involved in the tenancy for the first six months. Administration was then transferred to MTM. The first letting agency refunded the tenants their agency fees, totalling £1200, on Thursday 24th August, after a brief picket protesting against the agency for introducing the tenants to this poor-quality accommodation.

The campaign has now transferred to the landlady’s current agency, MTM, beginning with a picket outside the branch at 5pm on Tuesday 5th September. Brighton SolFed has supported the tenants to try and find an amicable resolution to the dispute, with a demand letter being delivered to both MTM and the landlady one week ago. However, so far, an adequate offer of compensation has not been made by the landlady.

With the support of Brighton SolFed, the tenants are demanding that the landlady pay them compensation out of the £34,320 rent that they paid to her over the course of twelve months. The damp problems took six months to inadequately address, the infestation problems persisted until the end of the tenancy, and women living in the house were subject to harassment by the tradesmen that carried out the damp work. All in all, it has been a distressing experience for the tenants. One tenant commented: 'the stress that dealing with this for a year has caused me has affected my university work. We just want to be respected and compensated for living in such a terrible property'.

The landlady has consistently tried to obfuscate this process into administrative and bureaucratic procedures that take significant amounts of time, technical knowledge, and which are stacked in favour of landlords by virtue of them being carried out by various different groups – councils, the ombudsman, the letting agency themselves – which do not want to upset or lose the business of landlords. The problem for the agency is that SolFed does not hide disputes in administrative or judicial procedures. Our intention is to bring every dispute onto the streets. Not just because it is faster, cheaper and more effective, but also because it is the only way we can understand that each of us has the same problems. Through solidarity and direct action, ordinary people have the power to improve their lives.

This article was published on 6 September 2017 by the SolFed group in Brighton. Other recent articles: