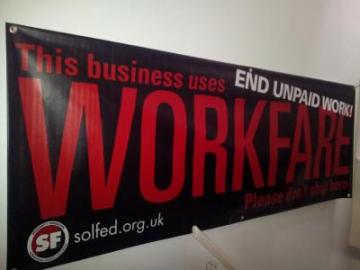 These are schemes that are dishonestly labelled “Schemes for Assisting Persons to Obtain Employment” despite research and statistics clearly demonstrating that – if anything – they have the opposite effect. (See http://www.guardian.co.uk/news/datablog/2012/nov/27/data-work-programme-failures or http://research.dwp.gov.uk/asd/asd5/rports2011-2012/rrep824.pdf for examples)

These are schemes that replace jobs, reduce hours available for existing employees and make it more difficult for the unemployed to find (paid) work.

These are schemes that will eventually come to replace many low-paid state sector jobs as the government hacks away at public sector budgets.

The fight against workfare continues.