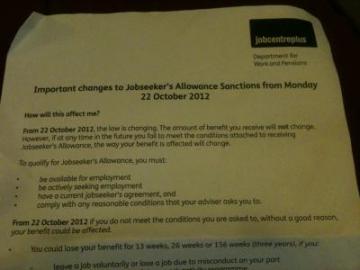 The governement has today significantly increased the sanctions for non-compliance with the benefits regime, including the controversial unpaid, forced work 'workfare' schemes. Under a 'three strikes' policy, benefits will be stopped for three months, six months, and then three years for failing to meet a series of conditions, many of which relate to workfare. According to a notiification letter given to all JSA claimants, this includes:

Government to claimants: work unpaid or starve
After a brief spell of intense media scrutiny back in February, the government temporarily suspended sanctions on the workfare schemes. Now they think nobody's looking, they've significantly increased the sanctions across the board, meaning refusal to do unpaid work could lead to suspension of benefits for up to three years.

However, the campaign against workfare schemes has continued. In July, Holland & Barret, who had strongly backed workfare, withdrew from the schemes citing targeted direct action. Get in touch with your nearest SF local or the boycott workfare network to find out what anti-workfare activity is happening near you. Over the coming year, tens of thousands of people will be forced onto workfare schemes and even more paid jobs will be replaced by workfare. If those in work and out come together to disrupt workfare exploiters on a mass scale, workfare can be defeated.