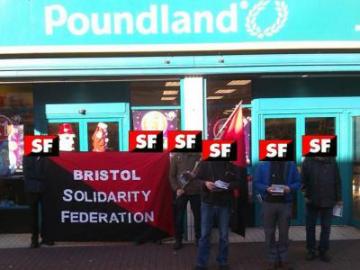 Why Poundland? Within a short distance of East Street are many other shops that are still involved in Workfare. Others that operate in Bedminster include Asda, Greggs,  McDonald’s, Poundstretcher, Savers, Shoe Zone, Super Drug and Wilkinsons. We are targetting Poundland as part of the National SF campaign. We aim apply pressure to one store at a time until they pull-out. While always have an eye on our next target.

The picket was well received by the passing public. Our message meant that quite a few customers decided to shop else where that day.

Details of the next picket will be annouced very soon.

This article was published on 19 November 2012 by the SolFed group in Bristol. Other recent articles: