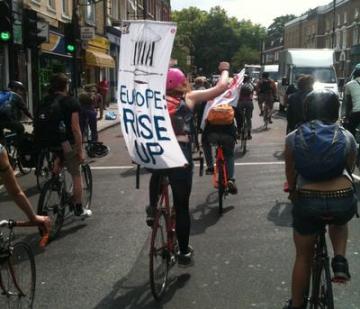 With June 30th widely recognised as a strike about cuts as well as pensions, people across the country joined in on the day to show their support and anger. In South London, the aim of generalising the strike was realised through the double fun of critical mass and street party!  The results were tangible, with multiple road blockages giving a jab in the side of the economy whilst public sector workers dealt the right hook of the day.

60 cyclists toured south London, visiting pickets at LCC, Imperial War museum and Lambeth College.  Many cars tooted in support as the cyclists disrupted the flow of labour and goods. Others were less happy; one man leaving his van unattended in the middle of Lambeth rd, to shout at the cyclists and whine to the police, returned to find his keys missing and himself the cause of major road blockage! After a visit to the PCS rally in Brixton, the Mass made its way to the New Cross street party. Upon arrival, the two forces joined to form a 100 strong presence in the middle of the A2. Soundsystems blared, people danced and bikes were held aloft as traffic stood still. These scenes lasted 20 minutes before police moved the group down the road, eventually leaving South London for central.

Though the economic disruption caused by South London anarchists and lefties was not massive, it was a welcome extension of the strike. As more strike action is taken in the months and years ahead, the support of non-striking workers, the unemployed and students may prove decisive in the battle against austerity measures. How we generalise the “generalise the strike” actions beyond our comrades and friends will be the next challenge.

This article was published on 30 June 2011 by the SolFed group in South London. Other recent articles: