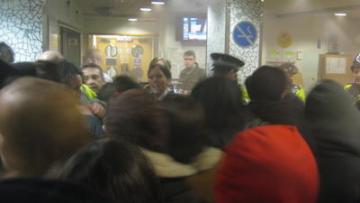 On the 29th November, Lewisham held its full council meeting to agree its first tranche of cuts, involving over 400 job losses, cuts to services and the closure of a children's centre. Not yet agreed were proposals to close five libraries.

There was a demonstration outside the Town hall in Catford, made up of local campaigners, later joined by a march from Goldsmiths University. The Council decided to let only a fraction in to observe. Around 100 people tried to force their way into the building in an attempt to stop the vote going ahead. Some protestors got to the council chamber whilst others faced police brutality in the lobby, where batons and fists rained down on the peaceful protest. After half an hour, the protestors were ejected from the building. The meeting was subsequently held in private where the first wave of cuts were passed by the Labour run council. All 36 Labour councillors, including a full-time official for the local government union Unison, voted in favour of the cuts and job losses.

The lobby at the town hall continued outside where several hundred people faced riot police, horses and dogs. There were so many cops that the main South Circular road outside the town hall was closed due to the number of police cars and vans.

The anger displayed at Lewisham and the willingness to take direct action is an indication of things to come. As cuts are passed and implemented across the country, it looks increasingly likely that they will be faced by serious opposition. The cuts must be unworkable, we must be ungovernable.

This article was published on 2 December 2010 by the SolFed group in South London. Other recent articles: