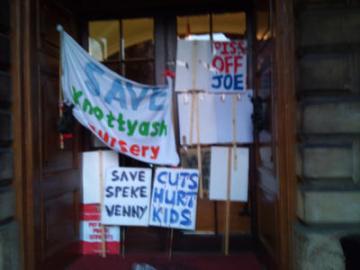 Members of Liverpool SF distributed leaflets arguing that "only when we take matters into our own hands as a class, and shun those who seek to lead and control us, will we have any chance of bringing about radical social change."

But it appears that many had already cottoned onto this fact. That a Labour council is pushing through the biggest cuts in the country appears to have opened people's eyes to the fact that party politics is a con. One particular sign, directed at council leader Joe Anderson, said it all: "Piss off Joe!"

In the wake of speeches by Liverpool Trades Council, there was an attempt to storm the building and take over the council chamber - as had been done in Lewisham. However, security barred the doors and one man's attempt to kick the door in and break the glass using a wooden pole from a Unite the Union flag was quickly scuppered by a fellow activist. Unable to barge in, people then crowded round for a lively picket of the entrance, forcing two councillors to scarper and seek entry through a side door.

Once the meeting kicked off, people moved around to the side of the building so that we could aim megaphones directly into the meeting chambers and let our "leaders" know that we're not content to follow them.

By this point, daylight had gone and the night was getting colder, so 300 became 50. But it shows that there is a groundswell of anger at what is being done to the city by supposedly "left-wing" councillors and by the right-wing government they serve. 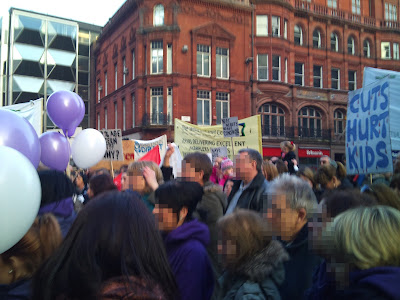 This time, the cuts passed - with the Lib Dems making a pitiful attempt to save face by proposing reducing the cuts to £90m knowing that they would get voted down. But as they bite, that anger is bound only to grow. And if it can be channelled into direct action on the streets, rather than resignation or the blind alley of electoral politics, then it may soon be a very different story.

Forgive me if it is wrong to

This article was published on 3 March 2011 by the SolFed group in Liverpool. Other recent articles: